The Eurotower is Europe’s most recognisable financial building and has played a crucial role in maintaining Frankfurt’s centuries old reputations as being a major financial centre.

Just before midnight on January 1, 1999, revellers outside the Eurotower in Frankfurt, Germany, held their breath. The moment not only represented the birth of a new year, but also the birth of the euro – the new ‘single currency’ of Europe. Outside the tower, the seat of the European Central Bank, a ‘euro clock’ counted down the seconds. When the count hit zero, fireworks and parties all across the European Union celebrated the occasion.

Since then, both the euro and Frankfurt have grown in international importance. The ECB quickly outgrew the Eurotower in the citys Bankenviertel (bank district) and in 2015, it  relocated to a new twin-tower purpose-built headquarters in Frankfurtfs Ostend. A division of the Bank – the ECB Single Supervisory Mechanism – is now the buildings sole occupier. In December 2018, PATRIZIA acquired the famous landmark for Fubon Life, one of the largest Taiwan-based insurance firms.

The Eurotower, now managed on behalf of Fubon by PATRIZIA, marked the Asian firm’s first deal in Germany. “The Eurotower is a high-quality, landmark building and represents a sustainable investment for our client in a city with solid and indeed strengthening fundamentals”, says Tom Stenhouse, Managing Director of Fund Management at PATRIZIA.

Mainhatten – a symbol of the future built on the past

The famous huge blue and yellow neon Euro sculpture by the artist Ottmar Hörl erected at the foot of the Eurotower makes it one of the most recognizable buildings in European finance. Built between 1971 and 1975 by German architect Richard Heil, it was one of the first skyscrapers in Frankfurt. Then, tower blocks were seen by many as too radical for traditional European city skylines, and the Heil building had its fair share of criticism.

Today, however, the bustling skyline has come to symbolize Frankfurt’s increasingly importance in the world of finance. Now the Eurotower jostles into the sky alongside an impressive number of other banking skyscrapers. 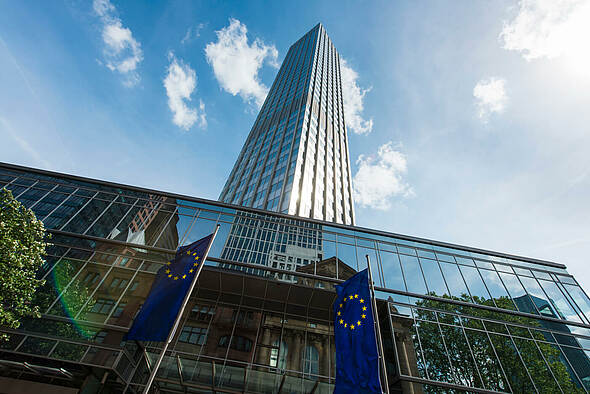 Part of the financial district and the bustling skyline of "Bankfurt," the Eurotower remains a city icon.

From a distance, the glittering Bankenviertel looks like a mini version of Manhattan, with its golden windows reflecting in the River Main, which explains its nickname "Mainhatten".

Frankfurt is not only an important banking centre, but also, as the seat of the ECB and the Bundesbank, plays a role in monetary and foreign exchange policies. Yet, this is not a newfound role for the city, for Frankfurt has a long history as a seat of financial power.

Frankfurt has been a financial and trading centre for centuries, mostly because of its strategic position along ancient trading routes. It was one of the first cities to set up a stock exchange (in 1585), the roots trace back to 11th century trade fairs. By the 16th century, it had become a wealthy trading and financial centre, and in the 18th century, was where the Rothschild family established its banking empire.

After the Second World War, Frankfurt hoped to become West Germany’s new capital. Instead, it took over the role of Germany’s financial centre from the then divided Berlin.

The Deutsche Bundesbank made Frankfurt its headquarters, and other major banks followed, including in 1964, the Bank für Gemeinwirtschaft (BfG). The BfG bought several plots of land close to Frankfurt’s theatre and opera house, and the architect Richard Heil designed a 148-metre, 40-storey building that would become the Eurotower.

Integrating the new with the old

The building was a typical 1970s tower block with a reinforced concrete skeleton structure and a metal-glass curtain wall. Breaking away from the more austere, less decorated 1960s tower blocks, which had their roots in the functional International Style, the Eurotower was designed with a natural stone façade in some areas.

In the post-war boom, architects were attempting to integrate the rapidly modernising Frankfurt with its historical old city. So, Heil designed a building that not only provided office space, but also a link to the pedestrian zones of the city centre. On the three lowest of its five basement floors, it had a “commercial gallery” for visitors and employees, and a “leisure landscape” with shops and restaurants. The basement not only supplied three floors of parking, but also a direct link to the Frankfurt underground.

The building underwent extensive modernisation in 2014–2016, when sections of the conference area were upgraded. The ECB intends to remain a tenant for a long time, and Fubon aims for a long-term investment.

“That means our role is to nurture a sustainable relationship of trust between the two partners”, says Julia Fischer, Associate Director, Asset Management at PATRIZIA. She describes her role as “like brokering a long-term marriage, where it is important to make sure the needs of both partners are aligned.”

- by Victoria Sussens and Greg Langley

The man who ‘invented' handwashing

Why Berlin is marching to the river