An attractive outlook for returns is creating a boom market for hotel investments in Germany.

Investors are increasingly discovering that the German hotel investment market is a lucrative addition to the realm of alternative investments: According to an analysis by the real estate service provider CBRE, investors poured 1.15 billion euros into hotel properties in the first quarter of 2017 – 55 per cent more than in the same period the year before. With that, Germany is now Europe’s largest hotel investment market – moving ahead of the UK, which has total investments of just over a billion euros.

“Top returns from core products in prime locations in Germany continue to run at about 4.5 per cent, though downward outliers are increasing,” Olivia Kaussen, Head of Hotels Germany at CBRE, told the financial magazine Portfolio institutionell. Hotels offer substantially higher returns than office buildings or retail properties, which often provide yields well below the four per cent mark. And demand is growing: in 2015, there were over 272 million overnight stays throughout Germany, climbing to more than 279 million in 2016 – with Berlin the most popular city, followed by Munich and Hamburg. 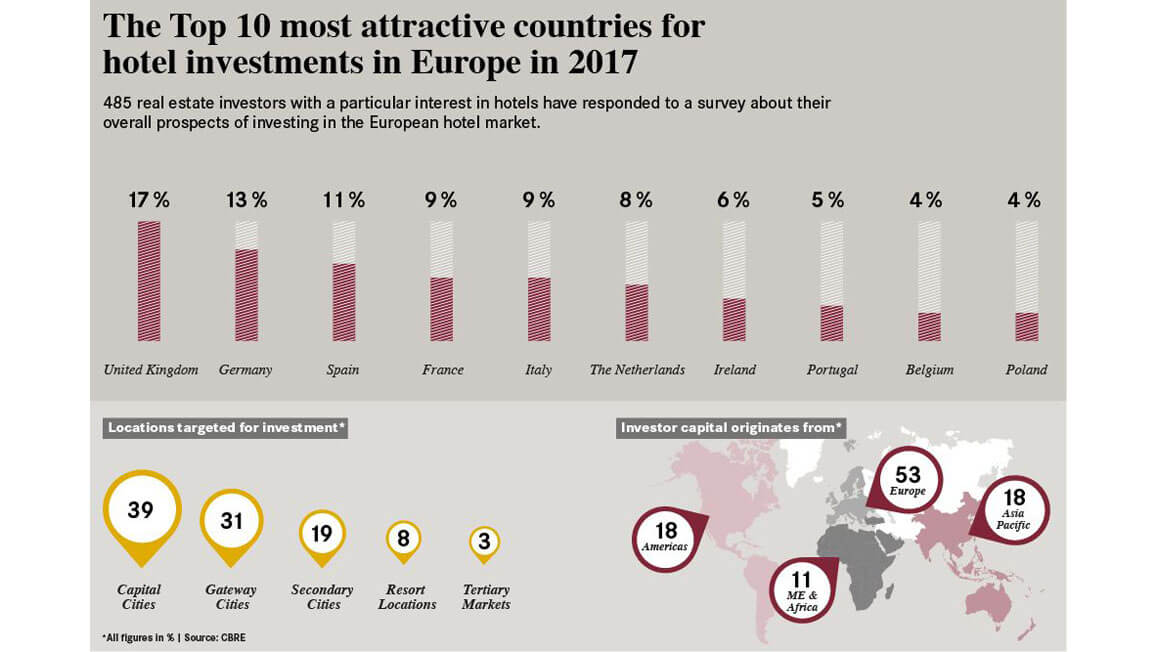 The sector has plenty of room for expansion, as market penetration is still quite low in international terms: just half the European average, in fact. And half of the sector’s revenues are generated by private hotels, which are exposed to massive competition from AirBnB and other online accommodation placement services. In any case, small businesses generally have a hard time investing enough and responding quickly to new trends.

The most important of these trends is digitalisation. Many guests consider high-speed Wi-Fi more important than a comfortable bed. Online booking is growing, as are automated check-in services in the lobby and concierge services via WhatsApp. New hotel brands are filling the gap left by undercapitalised private hotels: 25Hours, Roomers and a number of others are shaking up the market with successful lifestyle concepts, while established hotel chains like Accor, Interconti and Marriott are following their lead.

Strategic partnerships make the enormous investments easier. That’s how Motel One, for example, has invested some 13 million euros in four existing hotels in just five years. Consolidation is also rampant. Just a few examples from 2016: HNA took over a quarter of the Hilton Group from Blackstone and is investing in Rezidor. Accor Hotels has invested in Mama Shelter and holds 30 per cent of 25Hours. AC Hotels and Marriott agreed on a joint venture. It’s not just the cash for design and lifestyle concepts that is hurting corporate balance sheets: The real estate boom is driving prices up. 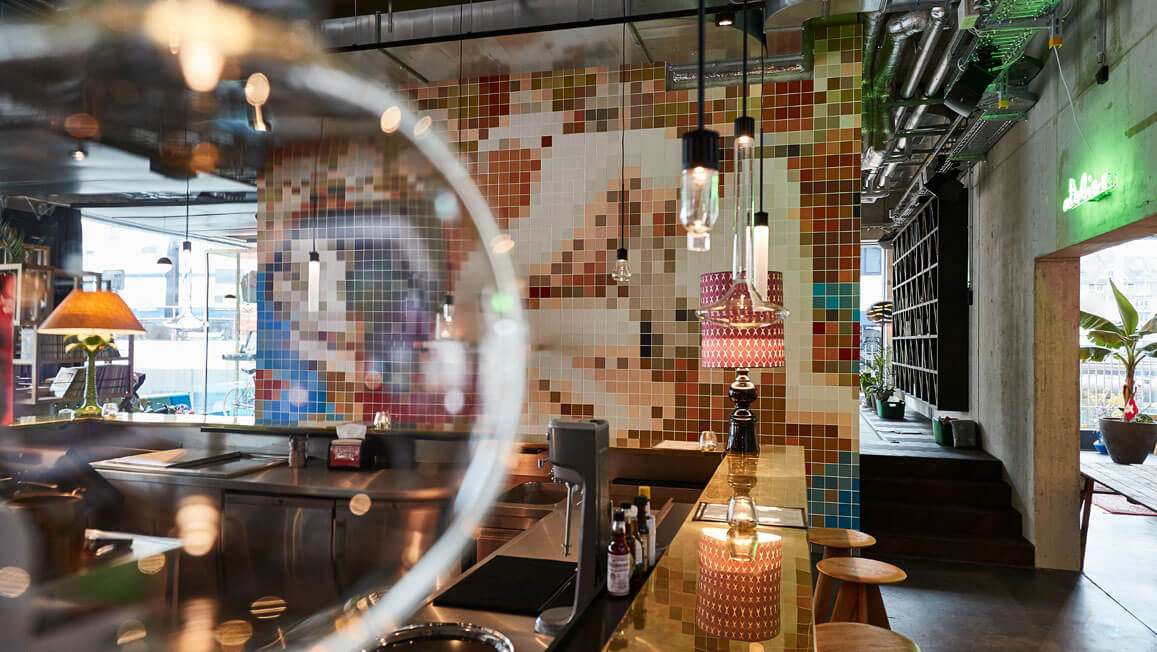 To acquire properties in prime locations, more and more investors are turning to project development, an approach that – due to its relative transparency concerning contractual partners, rental contracts, etc. – is a comparatively risk-free investment. Recognising the trend, PATRIZIA invested in two hotels under construction during the first half of 2016. ECE kicked off 2016 in January by acquiring the Düsseldorf hotel project of the innovative 25hours brand for a dedicated real estate fund. This four-star hotel, with 198 rooms on 18 floors, will probably open in the coming year. Located in the new Le Quartier Central district on the site of the former Derendorf freight train station, the thematically designed building will display Franco-German flair: a ground-floor café is planned, along with a French-inspired restaurant on the 16th floor. Another two floors up, plans call for a bar with a spectacular view of the city.

Boutique and theme hotels an attractive addition to the portfolio

In April 2016, PATRIZIA took over the last property planned for development on Hamburg’s Sandtorkai: the Magistrale, which joins the city’s port to the centre of town. The project, acquired from DC Developments, is an extraordinary one. The eight-storey building complex will combine a hotel, a cinema and apartments. Long-term use agreements have been signed with experienced operators for all forms of use at the PIERDREI boutique hotel. “We’re delighted that we were able to acquire on our clients’ behalf this extraordinary property – with an exclusive hotel and apartment concept, and a promising cinema business – in the Port City district, an investor favourite in the thriving Hamburg metropolis,” said Douglas Waibel, Associate Director, PATRIZIA Immobilien.

"PATRIZIA has been steadily expanding its involvement in the hotel asset class for several years now."

Although hotel properties are a long-established asset class, contracts can be tricky. International hotel chains – especially if they’re listed on the stock exchange – are only willing to sign management agreements, while German institutional investors insist on the type of business operation lease known as a Pacht. Here’s the root of the dilemma: under International Financial Reporting Standards (IFRSs), a long-term business lease like a Pacht counts as a liability, while a management agreement doesn’t. But German investment funds aren’t allowed to engage in management agreements, because this form of contract leaves the operating risk with the owner. In addition, these funds are only allowed to collect rental and lease income, not operating income from the hotel.

Despite the contending interests, however, fund initiators are investing massively in hotels. That’s possible thanks to a trilateral contract model under which an operator-lessee serves as the missing link between the owner and the hotel chain. The operator signs a Pacht lease with the owner and a franchise agreement with the hotel chain. This means investors must pay close attention to both the operator’s credit rating and the arrangements governing all the contractual obligations, because hotel contracts often run for terms of 20 to 30 years – so even a small oversight in the contract structure can have very serious consequences. 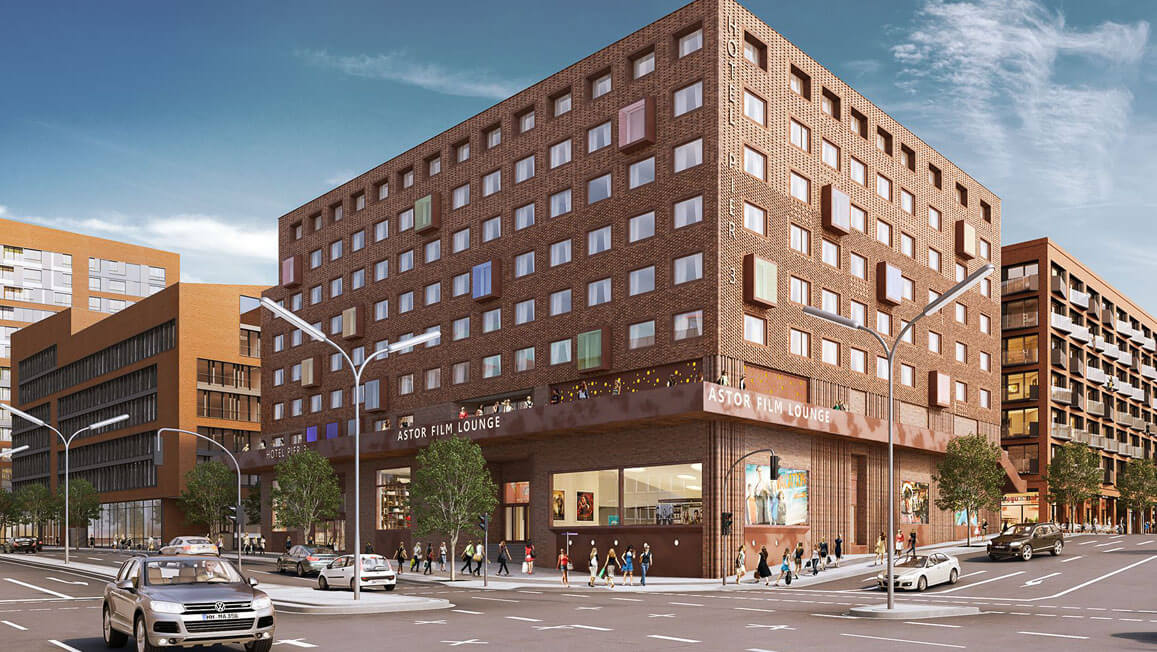 A long record of success in hotel investment

Any company that’s been working in this market for a decade – as PATRIZIA has – is well aware of all the pitfalls. Add to that the local expertise of PATRIZIA’s experienced team and it becomes clear why the company’s hotel investments have seen such success. The total return (according to the German Investment Funds Association BVI) for the PATRIZIA Hotel-Invest Deutschland I fund was 9.9 per cent in 2015 and 10.1 per cent in 2016. The fund’s cumulative performance, since it was established in 2007, came to 93.1 per cent – or an average of 7.1 per cent per annum. As of the end of April 2017, PATRIZIA managed hotel real estate assets of more than 600 million euros.

“PATRIZIA has been steadily expanding its involvement in this asset class for several years now,” says Waibel. And it’s worth focusing on specific market segments, because downtown, business and budget hotels have especially promising potential and are therefore part of the foundation of PATRIZIA’s investment strategy. Thanks to their above-average occupancy, boutique, design and theme hotels are an ideal addition to the portfolio. The broader European hotel investment market also offers interesting prospects: after all, it’s many times larger than the national market, where shrinking returns and product shortages make performance targets increasingly difficult to achieve.

Institutional investors are very interested in hotel investments if the location, prospective return and operating concept are right. But special contractual arrangements, precisely tailored to the parties’ needs, are essential. As part of a cohesive investment strategy, the German hotel investment market offers extraordinary opportunities for earnings thanks to strong demand. But shrinking returns in the capital market are making lucrative projects harder and harder to land. Other parts of Europe can offer a larger selection – but that potential won’t be realised for some time to come.

Tailored solutions instead of off-the-rack products for…