Some 20,000 new residents shifted into their accommodation at The Oval in Dublin early this year and are still buzzing with delight.

Since April, worker bees from two hives installed at the back of The Oval, a PATRIZIA managed Ballsbridge building, have been collecting honey within a radius of three kilometre, including at nearby Herbert Park, the banks of the River Dodder and from the flowerboxes of neighbours.

David Egan, Associate Director of Asset Management at PATRIZIA, initiated the action after a proposal from Ciarán McDonnell and Alison O’Neill from Knight Frank, the property manager. A little used landscaped area at the rear of The Oval building in Dublin was converted into a bee garden. Two paved areas were built for the hives to sit upon and an access pathway and decorative fencing were also put in place.

“It seemed a space that ideally lent itself to such use, backing it does out onto the river embankment,” he explains. “It was only small outlay really and it is a nice addition to the landscape.”

The corporate life of bees

Urban beekeeping is a growing trend. In the United Kingdom, hives are found on iconic buildings such as St Paul’s Cathedral in London, the London Stock Exchange, posh grocer Fortnum & Mason and the Scottish parliament building in Edinburgh. In the United States, the Whitney Museum of Modern Art, Harvard University, the Brooklyn Navy Yard, the Minneapolis City Hall and the terraces of the Waldorf-Astoria Hotel all feature beehives. In Paris, the honey produced by the busy bees at the Opéra Garnier have been appreciated by connoisseurs for more than 35 years. 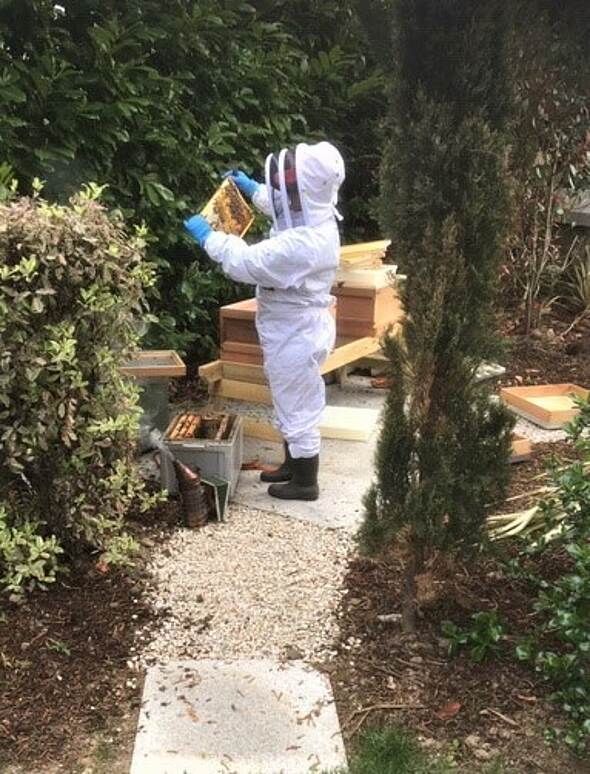 Rose Breslin harvest the first honey for The Oval hive in September 2020.

One of the drivers of the trend was the worrying stories a few years back about colony collapse disorder, which sees most worker bees in a colony disappear, and the implications that had for agriculture. The UN calculates that nearly 90% of the world’s wild flowering plant species depend, entirely, or at least in part, on animal pollination, along with more than 75% of the world’s food crops and 35% of global agricultural land.

The looming Beepocalypse inspired many individuals, businesses and governments to install bee populations. But is this good for honeybees?

London, for example, has the highest density bee population of any European city. Kept in the city for over a millennium, initially by monks who used their wax to produce candles, honey and mead, the bee population of the city tripled in the last decade. By 2019, more than 5,500 hives were registered in the city’s gardens and on rooftops with up to as many as ten hives per square kilometre compared to approximately one per kilometre for England as a whole.

This explosion in urban beehive densities has reached a point that there is a concern if Greater London has enough bee-friendly plants to feed the growing populations, which increases competition for pollen among the colonies.

“It is not a concern we faced here at The Oval,” says Ciarán McDonnell. “We had a registered beekeeper advise on our project and she said it was an ideal location because the riverbanks and surrounding flower beds are perfect for bees. There is growth and wilderness and they are not threatened by other animals. There is also a far lower density of urban hives here in Dublin.”

The beekeeper who manages the project is Rose Breslin, secretary of the County Dublin Beekeepers’ Association and a woman who found her apian calling after retiring as a teacher in 2011. She explains that, although it seems strange, bees thrive in non-agricultural areas like Dublin, because of a lack of pesticides and sprays and a wide variety of flowers to forage on. Bees in the countryside have it tougher because of monocropping.

The bees at The Oval come from Rose’s own hives and are the native Irish honeybee (Apis mellifera mellifera). For many years, scientists had thought it extinct, a victim of diseases introduced by imported foreign hives, but the native black bees have had a dramatic rebound in numbers thanks to keepers like Rose.

Bees are also proving helpful in other ways, apart from pollination. They help maintain the green roofs that are becoming common in large cities and, in a small way, contribute to a building’s LEED (Leadership in Energy and Environmental Design) rating, an ecological wellness stamp of approval promoted by the United States Green Building Council. 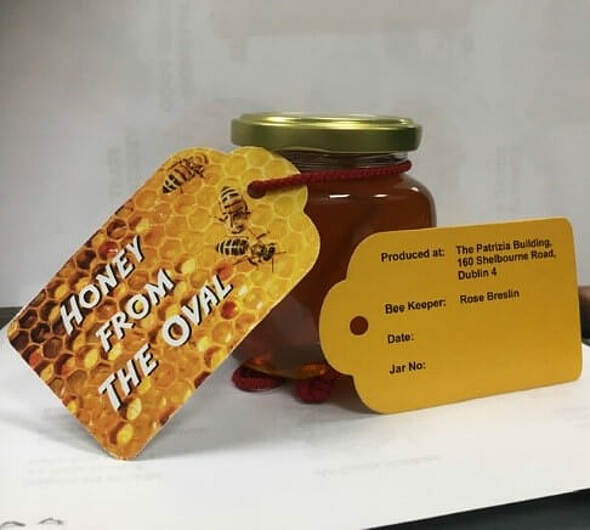 Green roofs provide vegetation for water control, wildlife habitat and better urban air quality. In Manhattan, the 51 stories glass skyscraper of The Bank of America Tower hosts beehives on the roof, according to The New York Times. The 6,000-sq-ft green roof is a critical element of its LEED Platinum rating – the highest possible – and the two hives help maintain the sedum that adorns the rooftop.

Back at The Oval in Ballsbridge, one of Dublin’s prime central business districts, Rose harvested the first honey from the hives in September. The amount came to 60 jars, which was distributed amongst the 15 tenants in the building.

“It’s lovely, dark and not what you expect,” says Ciarán McDonnell. “You know the first time you drink a schnapps and have a slight burning in the throat? The taste isn’t that intense, but it has a hint of spice to it and not sugary or sweet at all. It’s very, very pleasant.”