Over the last two years, PATRIZIA has been the number one investor in supermarkets and specialist food retail assets in Europe, investing €638 million in what has become a leading niche sector and an emerging asset class. In total, the top 20 companies invested €7.36 billion in the food sector, according to a 2019 report issued by fund initiator and investor Habona.

So, what precisely is the logic behind PATRIZIA’s involvement in the sector? It’s a risk-adjusted strategy, explains Daniel Herrmann, Managing Director, Head of Fund Management Retail at PATRIZIA. “People always need to buy food. In an economic downturn, people might eat different or cheaper food, but they won’t stop eating.”

This is true when you consider that Germany’s population is unlikely to shrink, at least for the next two decades, as the effects of immigration offset an ageing population. According to calculations by the Cologne Institute for Economic Research, more than 83 million people will live in Germany in 2035, the Habona report states. And those 83 million people will need to eat and to do this, they need food infrastructure.

So, when did PATRIZIA become interested in the subsector? Back in 2012, it became one of the first investors when it started buying food-anchored retail parks, supermarkets, or stand-alone food retail assets -- so-called speciality market retail assets.

At the time, speciality market retail assets offered attractive pricing, yields were high and PATRIZIA rightly considered this part of the retail world to be both stable and resistant to e-commerce. 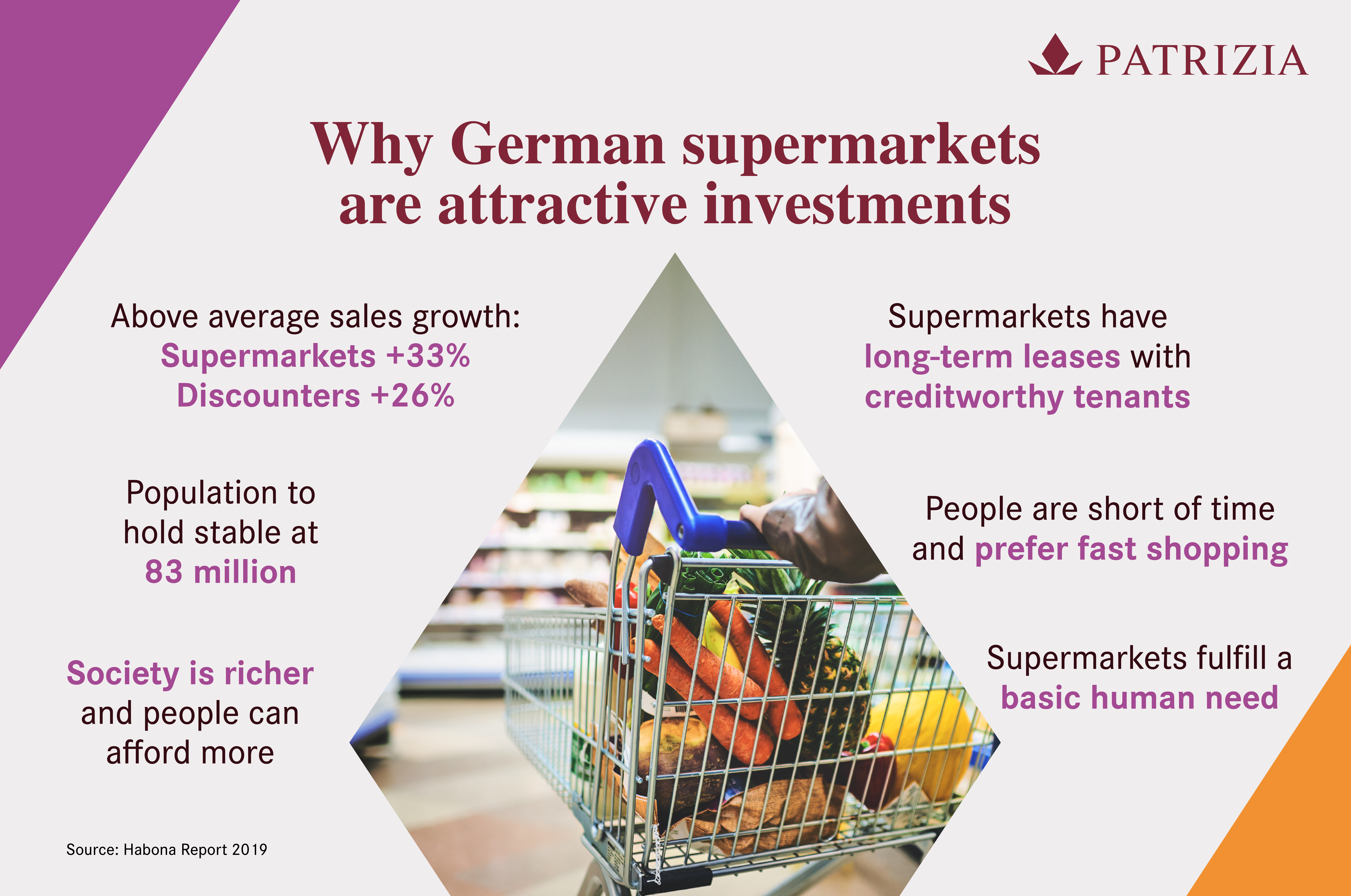 “Looking back, we made a decision to strike out in a different direction,” explains Herrmann. “Unlike many other investors, we decided to leave shopping centres and high street assets alone and built-up a portfolio in this subsector of about €2 billion. That decision now seems absolutely right.”

“Many investors who focused instead on the high street and shopping centres are now facing problems,” says Herrmann. “Issues are arising due to high pricing at acquisition, structural or valuation issues, reduced rent levels due to lower turnovers on the tenant side and a dwindling number of potential tenants as a result of spiralling competition from e-commerce.”

In the meantime, PATRIZIA has become the leading property owner in Germany for well-known supermarket chains, such as Aldi, Edeka and Rewe. “This places us in a very strong negotiating position,” continues Herrmann. “When we go to meetings, we carry out discussions with the top levels of the organisation, discussing up to 90 assets on one day, saving on both time and resources of our management team.”

Despite being a pan-European investor, PATRIZIA is focussed on the German market, he says. “Our view is that German food retail organisations are probably the strongest in Europe. The market is divided between full-range supermarkets and discount chains. Just look at the issues Tesco is having with the likes of Lidl coming over to the UK. This process started 30 years’ ago in Germany. By now, we have a well-balanced oligopoly, which consists of strong survivors.”

The strict planning regime in Germany and difficulty in obtaining permission further strengthens PATRIZIA’s position. “There is limited room left for expansion now – it’s pretty much a closed shop,” says Herrmann. Realistically, the only way for a supermarket chain to expand its number of stores is to take over a competitor’s location.

After being extremely active between 2013 and 2015, PATRIZIA has recently slowed down acquisition in the subsector as an increasing number of institutional investors have shifted their focus over to food retail. “This is good for our assets as they’re constantly going up in value,” says Herrmann. It also means, however, that pricing for any potential new acquisitions has also increased.

That said, the subsector remains affordable compared with other parts of real estate and the yield profile and risk return profile are excellent. As a result, PATRIZIA continues to be the biggest buyer but is just adopting a more cautious approach. “We’re still buying and are sitting on money to be invested in retail,” says Herrmann. “However, we’re not under pressure to invest and are concentrating only on the good opportunities that come along.”

The most recent opportunity was the purchase of 27 retail properties across Germany from Marathon Asset Management for around €100 million, which was announced in early April. The portfolio of 55,600 sq. m of total lettable space is made up of retail parks and grocery stores. The tenant structure is dominated by the big four of German food retailers: Aldi, Edeka, Rewe and the Schwarz Group.

The purchase brings the total investment of PATRIZIA into the sector in the past two years now to €738 million.

Focusing on more than returns