The PATRIZIA City Ranking illustrates which European cities are the most attractive and which the most liquid, helping investors develop a truly diversified European residential portfolio.

Where is best place to invest in Europe? Given European urbanization , it’s clear that investors should focus on cities, not countries when developing their European residential investment strategy. That’s why PATRIZIA AG has developed a European Living City Index for 2020, examining 120 capitals and larger cities to enable residential investors to understand the drivers that render a city attractive in the long-term and tailor their investment strategy accordingly.

The leading pan-European real estate investment partner analyzed the demographic and economic aspects of cities, their innovative capacity, for example, current student and patent application numbers, as well as how “powerful” they perceived them to be.

Examining these subfactors and weighting the data allowed PATRIZIA to determine the cities’ long-term attractiveness. “The higher a city scores in each of these categories, the more successful it will be for an investor in the long run,” explains Dr. Marcus Cieleback, Chief Economist of PATRIZIA.

Ultimately, the index enables PATRIZIA to structure its thinking about the investment focus of funds in the cities covered and direct the investment activities of other European residential funds. This helps investors diversify their portfolios by location and risk profile and identify target cities according to risk-return requirements.

So, what are the main changes since the index in 2017, the last time the report was issued? London, Paris, Vienna and Munich still occupy the top four spots, as per the previous ranking. Oslo, meanwhile, nudged up from seventh to fifth position, while Stockholm slumped to sixth from fifth place. In terms of the biggest movers, Nuremberg jumped a massive 67 places to 39th position, while Bergen was the second biggest mover, climbing 35 places to 66. As university cities, both are able to appeal to young people, draw in new companies and thereby create an environment where innovation can foster, says Cieleback.

At the end of the day, having an attractive city you can’t invest in is pointless, which is why a second dimension, namely market liquidity is equally important. PATRIZIA’s index therefore includes a liquidity analysis, based on the number of transactions recorded in each city over the last four years.

Vienna delivered the biggest surprise: the Austrian capital was home to the most institutional residential transactions, says Cieleback. “Changes in the law over the last few years have increasingly opened up the Viennese residential market to international investors.” 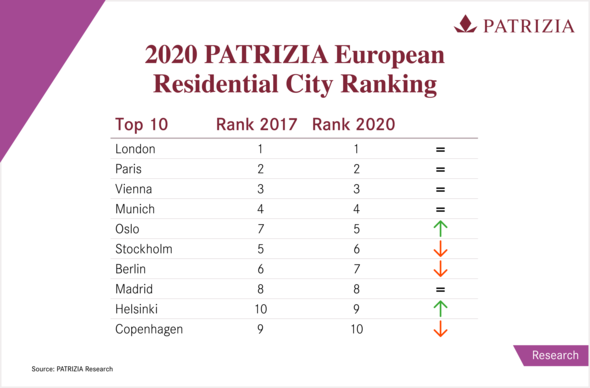 Overall, European markets have become more liquid: as the supply of product increased, that supply was also traded, therefore boosting liquidity in the market, explains Cieleback. “This research shows us that, yes, supply is increasing but it’s nowhere near a level where you will run into oversupply in different regions.”

In addition, the index illustrates the huge growth in residential investments made by institutions over the past 10 years, mirroring the emergence of residential property as a secure asset class for insurance companies and pension funds.

The geographical composition of these transactions has changed, however: shortly after the financial crisis, two thirds of all residential transactions took place in Germany. Now only a third are in Germany, with the remainder more evenly spread throughout Europe.

A piece of Hamburg history