The architecture firms selected to help PATRIZIA develop two prime sites in the Hamburg HafenCity project have been announced.

A new residential area is developed in Hamburg

Many Germans are familiar with the Elbphilharmonie – the concert hall in Hamburg. To the city’s inhabitants, its nickname is the Elphi. It’s probably now the best-known building in the HafenCity area of Hamburg, not just to locals but also beyond the city. It is also Europe’s biggest urban development project. HafenCity measures approximately 157 hectare and stands on a former industrial site in the old docklands. Directly on the waterfront, it is evolving into a completely new district comprising ten different neighbourhoods. Each spans a variety of uses, from commerce to housing, the arts, leisure activities, tourism and retail.

In 2000, the Government of Hamburg passed a master plan for HafenCity, which was subsequently revisited, discussed from every angle and adapted until it became the 2010 Master Plan. The big difference with the new HafenCity plan: significantly more apartments. For example, in Baakenhafen and Elbbrücken the new master plan allows for 3000 additional flats. Overall, the total number of new apartments in HafenCity will now rise from 6500 to 7000 flats, some of which are being developed by PATRIZIA. PATRIZIA will oversee new flats in Baakenhafen, accounting for approximately 27,500 sq m (296,000 sq ft) of floor space. There will also be co-working offices and space for restaurants and cultural pursuits.

By avoiding owner-occupied flats and the 30-year transition to privately funded residential flats, we want to make a contribution to the rental housing market in Hamburg.

Let’s look at how this came to be. In 2017, PATRIZIA joined forces with a building cooperative called Hamburger Wohnen. Together, they submitted a so-called HafenCity conceptual bid to the city of Hamburg. There were two plots up for grabs, and 50 building companies and property developers made bids for the land. In December 2018, PATRIZIA won exclusive options on two areas of land in Baakenhafen in the east of HafenCity: Plot 84a and Plot 84b. The Baakenhafen neighbourhood offers a variety of housing and leisure activities. It is also particularly valued for its publicly funded residential properties for families, students, the elderly and people with care requirements.

In 2019, PATRIZIA and Hamburger Wohnen invited architectural firms to submit bids for the first round of work on two housing projects. In response, it received 20 different plans from a variety of international architectural offices. In September, a jury of representatives from HafenCity, the Hamburg authorities, PATRIZIA and Hamburger Wohnen selected the winners. These were unveiled at a press conference in HafenCity on 14 November.

The winners of the pitch were the Hamburg-based architects DFZ, which was awarded Plot 84a, and Fletcher Priest Architects, which is responsible for Plot 84b. Outlining their decision, the jury said that 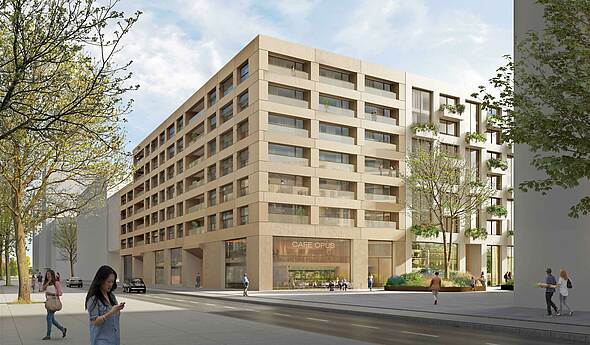 The project injects life into Hamburg and improves the housing situation.

One thing that both architectural projects have in common is that this time, PATRIZIA did not adhere to the conventional three-thirds rule for Hamburg, which entails building one third owner-occupied flats, one third private residential flats and one third social housing. "By avoiding owner-occupied flats and the 30-year transition to privately funded residential flats, we want to make a contribution to the rental housing market in Hamburg", says Simon Querndt, director of Real Estate Development in Hamburg for PATRIZIA.

In so doing, PATRIZIA is not just adding an architectural and building highlight, but also injecting life into Hamburg and improving the housing situation.