Nothing to see here, folks

Interest rates are unlikely to rise until 2020 at the very earliest. And if and when they do, investors in German real estate have little to fear, says Marcus Cieleback, PATRIZIA’s chief economist

During most of 2018, everyone seemed to be preoccupied with one question — when would interest rates rise in the euro zone?

With the Fed suspending its own very gradual interest rate increase schedule, and the economic situation deteriorating across Europe, it is now clear that the ECB will not be raising rates anytime soon.

With ten-year German government bond yields close to zero over the past couple of years, and prime yields for the office, hotel, logistics, residential and retail markets hovering above the 3% mark, the spread between bonds and real estate looks set to remain wide during the course of 2019. As a result, the fear of higher interest rates and their subsequent impact on real estate markets is no longer high on the agenda.

Attention instead is again turning to the fundamentals, such as the fact that real estate is a demographic-driven investment. In other words, demand exists in areas where you find population growth. This requires a strong focus on the urban locations that are able to draw in workers, families and students.

According to Eurostat, only about a third of all the regions in Europe will witness working population expansion over the next ten years. In Germany, the picture is similar, with only three out of ten regions set to see the worker demographic grow. Despite being in the minority, the pull of these growing areas is powerful.

Globally speaking, Europe is the dominant real estate investment region. About 50% of cross-border transactions currently transpire in Europe and these are heavily concentrated in France, Germany and the UK. Approximately two thirds of transactions occur within these three countries, with Germany and the UK each accounting for around a quarter of all activity and France hosting some 15% of deals.

Roughly half of all cross border money that flowed into German real estate in 2018 went into offices, which was boosted by a hunger for trophy assets and high rise towers in Frankfurt and other large assets in Berlin. Another 18.1% (€4.6 billion) of international money was allocated into residential, while both retail and logistics each made up 16.3% (€4.1 billion) of all transactions.

Digging a little deeper into deal flows, both cross border and domestic investors into commercial property have a strong bias towards the country’s top seven markets — Berlin, Cologne, Dusseldorf, Frankfurt, Hamburg, Munich, and Stuttgart — where about two thirds of all commercial transactions in 2018 took place.

In contrast, only about half of all residential transactions were registered in the seven big cities, and of that 50%, 25% centred in Berlin. The city is favoured by international players due to its position as Germany’s most liquid residential market.

The differences between the commercial and residential markets in Germany also extends to the sourcing of capital. The commercial side has a very international flavour, with nearly half of all transactions carried out by cross-border investors. On the other hand, only about a third of investors into residential were cross-border last year. This difference can mainly be attributed to a requirement in the residential market for a deep understanding and knowledge of local demand drivers and regulation, on a city-by-city basis.

Within a global context, Germany is therefore one of a limited amount of regions of interest to investors, which means that the German real estate market remains in rude health.And given the wide spread between prime real estate yields and those of German government bonds, if interest rates should rise in 2020, then there is a lot of room before we see an impact on prime property yields. There is usually a time lag of six to twelve months before rate rises are reflected in property yields, so any impact would only be felt in 2021 at the very earliest.

Even then, this should not present a dilemma for investors in German real estate. There may be a reaction in non-core assets, but in the case of prime stock, ECB action is not something that investors should fear. If we look back at what happened at the time of the dot com bubble in 2000, we had a phase where prime property yields were below ten-year government bonds.

That’s not to say that history has to repeat itself, but we know that if government bonds were to rise steeply and exceed prime yields again for a while, then it’s nothing that we haven’t already experienced.

There’s no need to be afraid of rising interest rates. 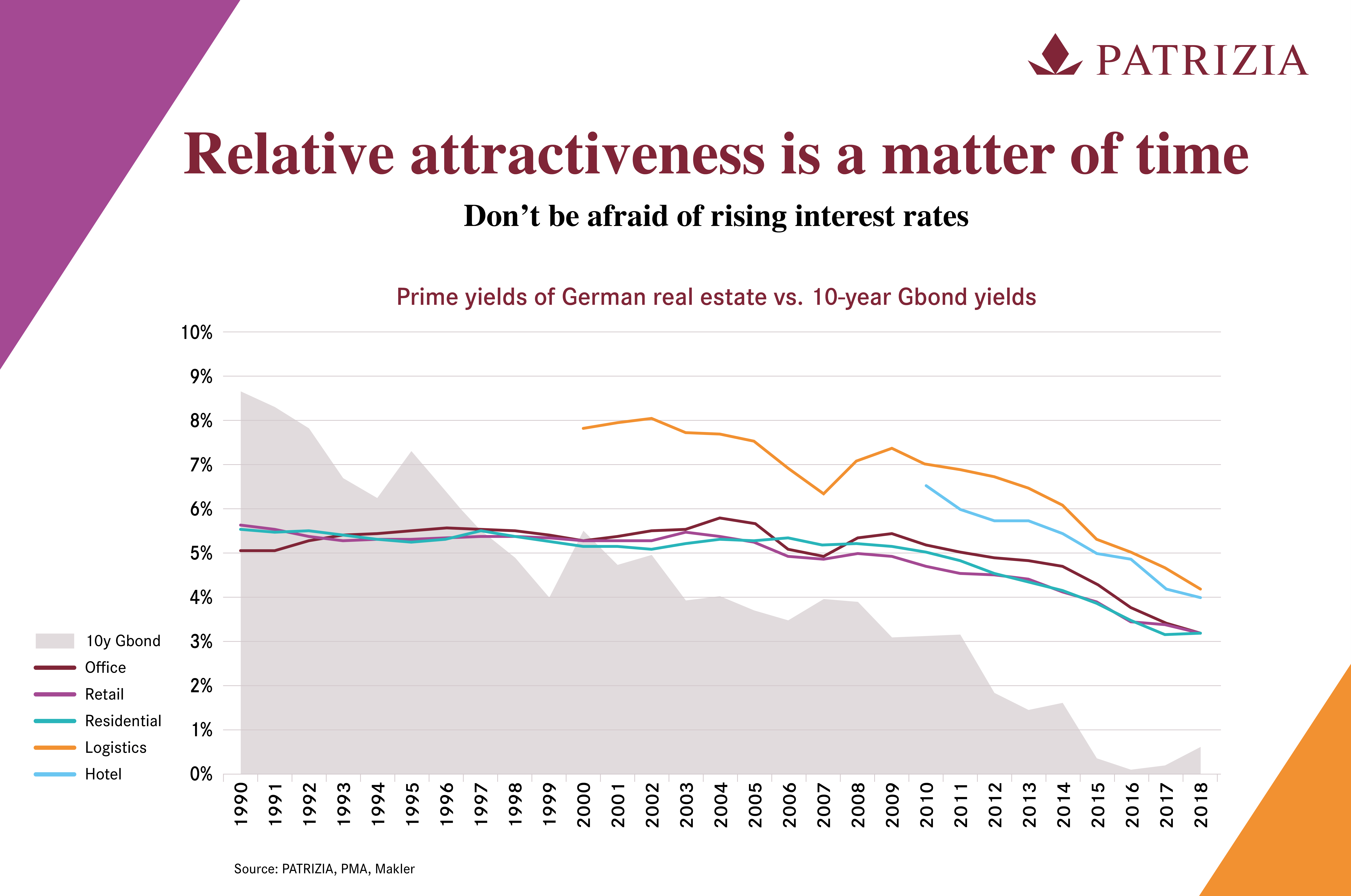 Focusing on more than returns

Property development as opportunity – how big are the…