Serrano 90 was a non-descript 1970s office block on the fringes of chic Barrio Salamanca, but a dramatic refurbishment has turned this ugly duckling into one of Madrid’s most elegant landmarks.

In a city where fashion is a lifestyle, the Golden Mile of Madrid is the ultimate destination for exclusive shoppers. Considered on par with Fifth Avenue in New York and London’s Bond Street, Barrio Salamanca is one of the premier luxury shopping districts in the world.

The pentagram formed by the streets of Serrano, Jorge Juan, Juan Bravo, Ortega y Gasset and Principe de Vergara houses boasts a full array of luxury stores with such names as Armani, Chanel, and Prada through to Tiffany’s and Louis Vuitton jostling for attention alongside the largest flagship stores of Massimo Dutti, Mango and Zara.

In comparison to the glittering architectural wonders surrounding it, the functional office block at Serrano 90 was easily overlooked. Located on the edges of the Golden Mile, it provided a steady return for the investor and the value gradually rose because of the expanding halo of the prestigious district.

But the building appearance was bland, which meant that shoppers parading along the broad pavement rarely spared it a glance. However, in 2016, the investor, acting on the advice of PATRIZIA, seized on an opportunity to dramatically redevelop the property and enhance its value.

“We acquired Serrano 90 for an investor in 2002 and the building had performed well, so the investor was considering selling as the strategic plan drew to a close,” says Heiko Suess, Head of Fund Management PATRIZIA Frankfurt. “We advised strongly against that because we knew there was much more potential to be gained from the building during a bull period in the market.”

To redevelop the property meant first negotiating with the then tenants, Banco Sabadell and the Embassy of Argentina, to vacate the building. PATRIZIA handled the negotiations and provided services to find and then relocate the Embassy to suitable alternative premises.

PATRIZIA also designed the strategic redevelopment plan for Serrano 90, ensuring the property went to market at the best time to position the building in the highest price range.

“RCCyP worked with Arup on the façade design. I say that the finished product has impressed even those of us who knew the potential. The results are astounding.”

The refurbishment involved a complete modernisation of the office building, rationalisation of the retail areas and basement car parking. The drab 1970’s façade has also been replaced with an iconic curtain wall façade using high transparency glass.

This opened the lower floors, so they can now be used for retail. The other 70% of the building serves as office space. With this mix of transparent and translucent façade, the building now joins the ranks of the elegant architectural landmarks in Serrano Street.

With redevelopment completing in Q3 2018, Serrano 90 is arousing significant attention and has achieved 100% occupancy. The retail storefront, 15 metres in length and with nine metres of clear height, hosts the first flagship store at street level of the French furniture and home decor firm Maisons du Monde in Madrid. The company is making a bold statement by taking over 1,800 square metres.

Natixis, part of the second largest banking group in France, is already installed as the other major tenant. Some 3,000 square metres of Serrano 90 between the fourth and seventh floors will serve as the bank’s new Madrid headquarters. The company’s logo will also crown the building façade.

The two remaining two floors of offices, which total 1,500 square metres, are the new Spanish headquarters of the UK law firm Pinsent Masons.

“This was a fantastic project to work on,” says Evans. “To play an active role in such a transformation is a privilege and the value we have generated for the investor has been exceptional.” 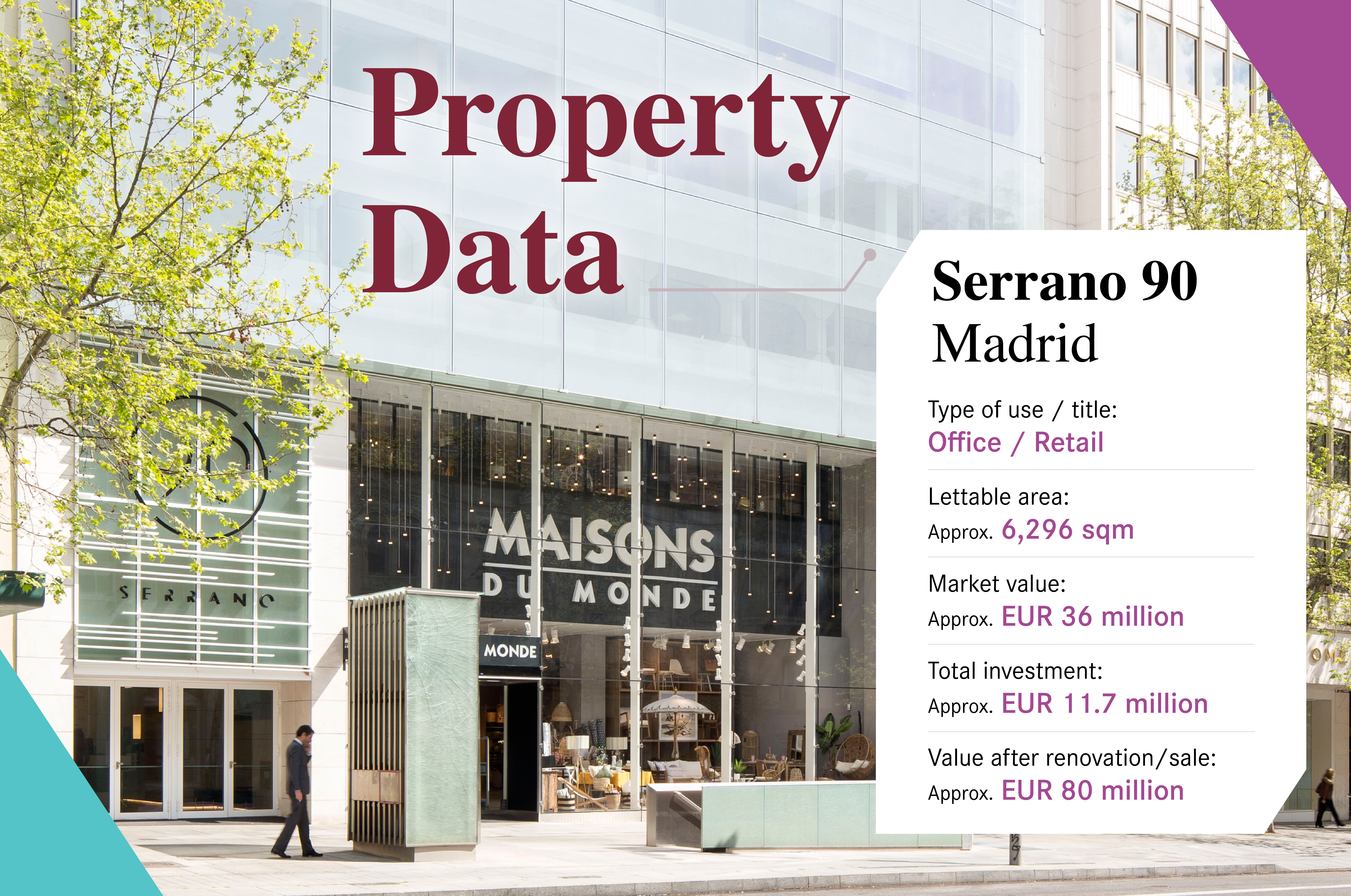