Hamburg’s HafenCity sets the tone for the European city of the 21st century, meeting challenges that make it a model for sustainable transformation.

Reclaiming the past while looking to the future

When the Iron Curtain fell away in 1989, Hamburg saw an opportunity to reclaim its role as a major Central European in a rapidly reuniting continent. The following year, the ancient port on the River Elbe moved quickly to launch HafenCity, Europe’s largest urban regeneration project.

Today, HafenCity is a model for the sustainable transformation of EU cities. A work in progress, it is turning an abandoned port area south of Hamburg into a leafy inner-city district. When completed between 2030 and 2050, it will have added 40% living space to the city.

Already a vibrant area that allows people to live, work and play in a park-filled waterfront, it is a major tourist attraction – and prime real estate. In 2014, PATRIZIA snapped up the iconic Ericus-Contor office block on the Ericusspitze, next to the equally iconic Spiegel building – both designed by the award-winning Danish architects, Henning Larsen. The building is currently 98% let to a range of SMEs and global businesses including Chanel, Hapag-Lloyd and Maersk.

A vision made urgent by Corona

“Since acquiring the property, HafenCity has grown from strength to strength, which has enabled us to crystallise positive returns for our investors,” says Philipp Schaper, Head of Transactions Europe at PATRIZIA.

One reason for the performance is HafenCity’s timely vision: The UN estimates three quarters of the world’s population will live in cities by 2050. Seventy per cent of Germans do so already. With space at a premium and cities becoming greedy consumers of resources, sustainable transformation is key to creating a liveable future. 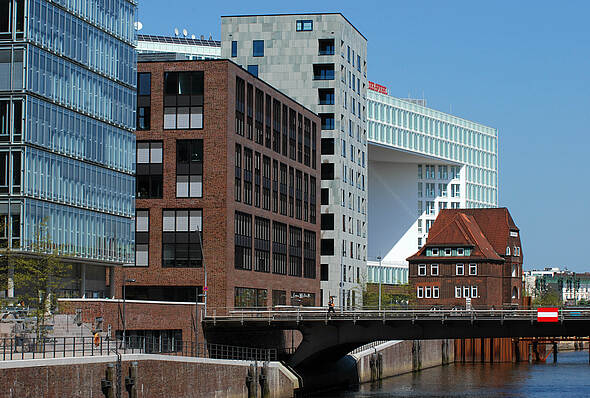 The Ericus-Contor is an iconic office block on the Ericusspitze, next to the equally iconic Spiegel building – both designed by the award-winning Danish architects, Henning Larsen.

HafenCity’s EcoLabel standards are demanding: buildings must use environmentally friendly materials, as well as energy and public resources sustainably and be sustainably operated. They must also ensure health and comfort. Landmarks that blend the modern and traditional are welcomed. The glass and brick Elbphilharmonie concert hall, which looks poised to sail down the Elbe, sets the tone.

Setting out to build an urban landmark

“The potential of HafenCity was hugely exciting to us,” says Louis Becker, design principal at Henning Larsen. “It reminded us a bit of [the converted industrial site] Refshaleøen in Copenhagen.”

"Since acquiring the property, HafenCity has grown from strength to strength."

The architects set out to create an urban landmark that would fulfil the highest EcoLabel standards and make the most of the wedge-shaped building site at the tip of the Grasbrook peninsula.

“The buildings are on the threshold to HafenCity, and it was important to us that it felt like a gateway,” says Becker. “We designed them as large U-forms that are meant to feel as though they are embracing the space they are directed towards. The Spiegel [built in 2011] faces the city across a canal, and wraps around an interior courtyard. The slightly smaller nine-storey Ericus-Contor [built in 2012] flows out into the open and green space at Lohsepark.”

The buildings share a brick base that includes a public plaza and a link to the promenade. Water reflects in the floor to ceiling windows, and the sky reflects in a still stretch of water in the plaza. The buildings resemble ships, or standing as they do where the city’s 1600s fortifications once stood, ghostly glass bastions.

"The potential of HafenCity was hugely exciting to us."

In May, PATRIZIA sold the Ericus-Contor to Union Investment Real Estate – then, 2020’s largest single real estate transaction by value in Hamburg. Following a programme of active asset management, the firm had completed its business plan for the property.

“Our sale of this landmark trophy asset in one of Germany’s leading cities is evidence of the continued demand from buyers looking for quality core real estate assets like Ericus-Contor, even during these challenging times of the coronavirus pandemic,” says Schaper.

Where the euro was born