The latest UN climate report warns that fossil fuels must be phased out by 2050 to avoid creating an unliveable world. Is such a transition in energy infrastructure possible?

The first and fundamental mistake we are making in tackling the energy transition is treating energy as a standalone economic sector. It is not. It is far more critical. Energy is the basis of our entire economy.

In prehistory, our ancestors generated the equivalent of about one kilowatt-hour per day (kWh/d) of energy through sweat and muscle. Today, that energy costs around 30 cents. Later, when agricultural societies emerged and leveraged the power of domesticated animals, water and wind, up to 120 kWh/d could be generated, the equivalent of 16 horsepower (hp).

The Industrial Revolution saw the development of the steam engine, which, powered by coal, could do the work of around 20 horses. In the 20th century, there was a shift towards higher energy content sources like oil, which stimulated the development of internal combustion engines that could produce around 100hp. 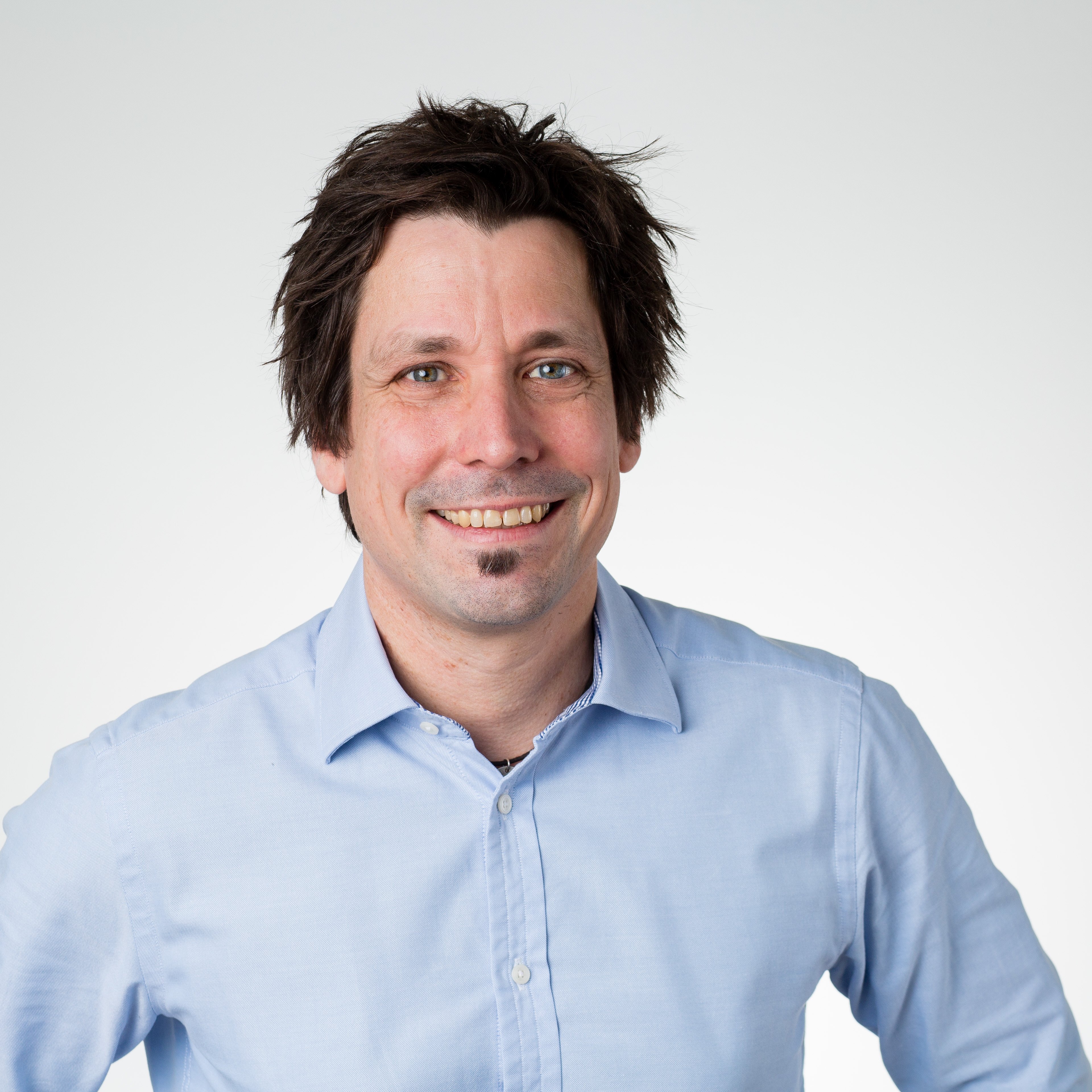 Failing to bend the curveThe electric car fallacyShould we electrify everything

Since then, we have improved the energy generators, but the basis of our economy still rests on leveraging fossil fuels to create value. An economy can be seen as a vast wealth generation machine. For example, in Germany, this machine is powered by 2,500 terawatt-hours (TWh) annually. This means each German every year has around 30,000 kWh (the equivalent of seven horsepower) permanently at their disposal, which is the basis of the prosperity we enjoy today.

Diagram 1 reveals how much our prosperity is dependent on coal, gas and oil. This is the challenge we – and all countries – face in the coming years: to transition to renewable ‘green’ sources to avoid catastrophic climate disaster while ensuring we retain the power to ‘keep the lights on.’

The UN Intergovernmental Panel on Climate Change (IPCC) released its latest report in early April. The nearly 3,000 pages make it clear that the window for limiting global warming to 1.5°C above pre-industrial levels – and failing that, to below 2°C – will take immediate and unprecedented action from every country.

To have a 50% chance of avoiding more than 1.5°C of warming throughout the 21st century, global emissions must reach net zero (where less carbon is released into the atmosphere than is removed) in the early 2050s. To achieve this, the emission of all greenhouse gases must peak by 2025.

Given the realities, that is an incredibly ambitious – even if existentially necessary – goal. On the positive side, more has already been done, at least in Germany, than is realised. Between 1990 and 2020, Germany reduced the amount of carbon dioxide (CO2) by 35%. However, the tempo demanded by the government requires CO2 emissions to sink by the same amount in the ten years of this decade as it did over the previous 30.

SOCIETY IS INVESTING IN ZOMBIE TECHNOLOGIES, WHAT WE THINK MAY BE PART OF THE SOLUTION BUT THEY DELIVER FEW BENEFITS WHEN YOU LOOK AT THE FACTS. THAT IS A WASTE OF RESOURCES AND TIME THAT WE DO NOT HAVE.

This is possible, but, in my opinion, we are making a second fundamental mistake in the way we implement climate policies. Even worse, the policies we implement prevent effective solutions being rolled out. Instead, we are investing resources in what could be called ‘zombie technologies.’ We think these may be part of the solution, but they deliver little benefit when you look at the facts. That is a waste of resources and time that we do not have.

One example is electric cars, which give us cleaner, quieter streets, making our towns and cities better places for cyclists and pedestrians. But even if there is mass adoption of e-autos, they will deliver little benefit in reducing CO2.

The Institute for the World Economy in Kiel, Germany and Frontier Economics have delved into the numbers. The German government aims to have 10.5 million electric vehicles on the road by 2030, saving 65 million tons of CO2. There would also be further savings of 8.8 million tons due to less demand on oil refineries. All this amounts to substantial CO2 savings.

But this does not consider the cost. E-mobility requires electricity, that is, power. However, electricity generation in Germany is not carbonneutral. This extra energy will add 54.4 million tons of CO2 to the equation. Producing electric cars is also more energy-intensive. Emissions can be as high as double that of cars with internal combustion engines, adding another 15 million tons of CO2. Building the infrastructure, the charging stations, the electric lines and so on adds another conservatively estimated 3.6 million tons.

If you compare the costs to projected savings, the difference is around 0.4 million tons worth of CO2 savings by 2030. This is precisely the problem with the current top-down, micro-managed, sector-goal approach to climate change policy. It is like a puzzle where each person works on their piece, but no one has the overall picture. Even worse, there is an incentive to push the problem onto other sectors rather than working together to find a real cooperative solution. 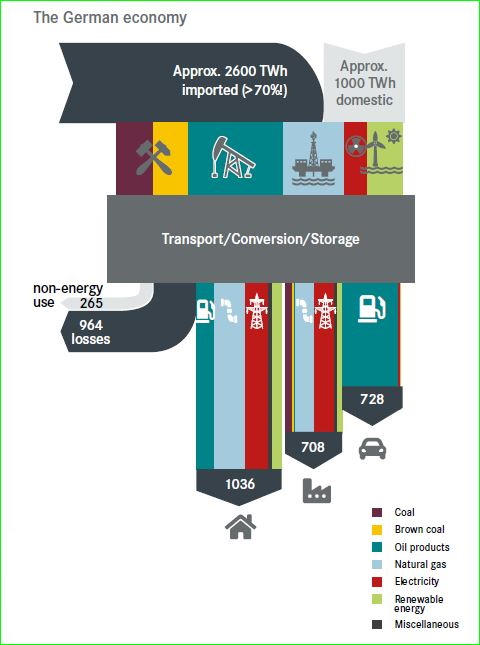 According to David Bothe, an economy can be seen as an energy conversion system. This image depicts the sources of Germany’s energy and how they are used.

We need to zoom out, understand the overall picture and then make smart decisions. For example, one big discussion is how to get renewable energy into the heating sector. About half of the 2,500 TWh used by the German economy is for heating, and if renewable energy could be implemented significantly, carbon emissions would be dramatically slashed.

One approach is to electrify everything – including heating – to create the electric city. This means using heat pumps in the residential sector and large-scale heat pumps, hydrogen-based industrial boilers and similar technologies in industry. An alternative is hydrogen boilers. Burning hydrogen does not release carbon into the atmosphere, provides instant heat and it can be considered ‘unlimited’ because it comes from water.

When you look at the two solutions, heat pumps running under 100% renewable energy have an efficiency of 285%. With hydrogen, you lose about 50% of the energy in the electrolysis and transportation process. Anyone looking at these facts would conclude that we are better off electrifying everything by a factor of five or more.

But what is forgotten is that electricity does not simply come out of a plug. There is an entire infrastructure needed for storing and transporting electricity. Today, in Germany, we have storage for more than 500 TWh for oil and 260 TWh for gas but only 0.04 TWh for electricity.

AT FIRST GLANCE, HYDROGEN APPEARS INEFFICIENT. STILL, WHEN YOU EXAMINE THE ENTIRE SYSTEM, IT IS SUPERIOR BECAUSE IT CAN USE EXISTING STORAGE AND TRANSPORT INFRASTRUCTURE.

If we eventually electrify all 50 million German automobiles, the electricity storage capacity will be inadequate just for this need. To meet the demand, Germany will need to rely on molecules, which brings us back to hydrogen. At first glance, hydrogen appeared inefficient. Still, when you examine the entire system, it is superior because it can use existing storage and transport infrastructure for distribution.

What is becoming evident in many studies and increasingly realised in the political sphere is that if we convert to renewable energy, we need the existing electricity network to provide power. But we will also need to use hydrogen as an important part of the energy mix even though it may be less efficient. First, because the energy transition is not possible otherwise, and second, it will be less expensive in the long term because existing infrastructure can be used and not built from scratch.

David is is a director at Frontier Economics, an economic consultancy, and an expert in energy and environmental economics.

22@ - a test ground for the digital world