India beyond bits and bytes

So affluent and yet so poor

India is a land of a thousand contrasts. On one side of the coin it has a promising IT industry, currently worth around 160 million US dollars. On the other, nearly 70 per cent of Indians live in poverty in rural areas. Indian society is traditional and divided by a caste system; women are disadvantaged and girls are often even rejected by their own families due to the expense of dowries expected by the families of bridegrooms. The PATRIZIA Children Foundation is now supporting disadvantaged girls in India and has recently opened its 17th Children Center in the southern Indian city of Porayar.

The Indian economy has been growing in 2018/19 by 7.3% and, thus, the country has one of the strongest exporting economies in the world. Its population of 1.3 billion people includes the highest number of millionaires and billionaires. Half of the Indian gross domestic product (GDP) stems from its innovative service industry, a figurehead of the entire nation.

The social contradictions of India

Despite the successes of the Indian service sector, it only employs around 27 per cent of the workforce, mainly in big cities like Bangalore (‘the Silicon Valley of India’), Mumbai and Delhi. One in two Indians live off the land, yet agriculture only accounts for 14 per cent of GDP. 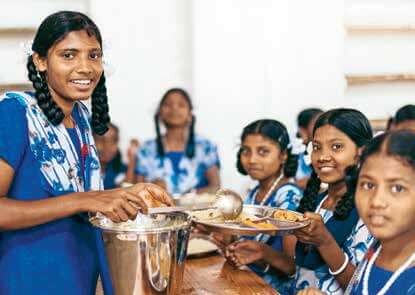 When girls are born in India, they often get a lukewarm reception and every year some 3 million female foetuses are aborted.

This imbalance is also reflected in immense affluence, yet appalling poverty. India ranks 130 out of the 189 countries in the United Nations’ Human Development Index. Why? Because nearly three quarters of the Indian population live in the countryside, where many families struggle to make two ends meet.

Education? In rural areas? An incidental.

When parents work in the fields as simple day labourers, or as manual workers or fishermen, they are normally unable to scrape the funds together for an education for their children. If they do find the financial means to fund a school education, the boys in the family come first.

When girls are born in India, they often get a lukewarm reception and every year some 3 million female foetuses are aborted. The main reason for this is the dowry tradition of paying a ‘wedding gift’ to the bridegroom. The cost is often astronomical. Many families are forced to reject girls out of sheer financial desperation or marry them off at a younger age to pass the financial burden on to others. 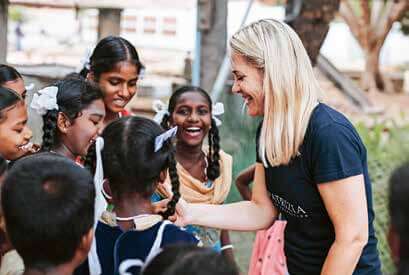 Sabine Schillinger-Köhne recently travelled to Porayar to meet those responsible for running the home and discuss different ways to provide support.

The standing of women in India is getting better, but only gradually The low esteem women are held in fuels oppression and sexual violence. The government has passed tighter rape legislation, but a great deal of education is still needed before – as now entrenched in Indian law – equal rights for both sexes become a reality of everyday life. The aim of one of the recent initiatives launched by the PATRIZIA Children Foundation is to do more to support the rights of girls in India and to assist them in gaining an education. The foundation of PATRIZIA has now erected a two-storey girls’ home in Porayar in southern India. The hostel will provide 240 orphaned girls or girls from broken families with a safe roof over their heads. The old home lost its operating permit due to a termite infestation. So the PATRIZIA Children Foundation stepped in with others and has now helped build a new home.

The home – official title: PATRIZIA Child Care Porayar – adds more structure to the lives of the girls through regular meals and an open ear from staff. All of the girls are given individual tasks to carry out. This allows them to learn to take responsibility and become independent.

There’s a playground in the inner courtyard for the children to let off steam. The girls also have access to an education thanks to the adjacent school providing them with an important opportunity to lay a foundation for subsequent vocational training.

Sabine Schillinger-Köhne, board member of the PATRIZIA Children Foundation, recently travelled to Porayar to meet those responsible for running the home and discuss different ways to provide support. Despite the many destinies that shape each individual, she remains optimistic after her visit: “The girls make it palpable and tangible that it’s not just circumstances that dictate whether life is good or bad; it’s your attitude and a positive outlook – both of which reflect admirable strength.” The PATRIZIA Children Foundation is working with its partners to put social injustice on the agenda and take active steps to combat social grievances.