In September 2016 the PATRIZIA KinderHaus in Yaoundé, Cameroon celebrated its grand opening. The children’s home will serve as a secondary school, accommodating up to 800 students per year spread across four forms at the school. The school was built as part of a cooperation between the PATRIZIA KinderHaus-Stiftung and the Catholic Pallottine Society. Rev. Brother Bert Meyer is particularly proud of the tables and chairs that equip the 21 classrooms: they were made in the carpentry workshop established and run by the Pallottines in Yaoundé between 1996 and 2008. Seen from a ‘first world’ perspective, this is a perfect example of the long-lasting success of charity work: teaching people a trade and setting up an operation that can sustain itself – all steps towards independence. In talking to Bert Meyer, it became clear, however, that independence isn’t the value he finds most important.

Brother Bert, are you proud of the boys that go through ‘your’ carpentry workshop?

I’m happy for them! The workshop is running very well and I hope it stays that way. Nothing is more motivating than full order books. The largest order the workshop has had so far came from the school. Two hun-dred school benches have already been delivered, another two hundred will follow over the next two years.

How is the carpentry set up?

There are always five or six trained full-time carpenters here and they are here for roughly the same number of apprentices. But the number of apprentices varies which can be attributed to drop-out rates – many don’t hang in there. They simply stop coming and don’t show up again. You have to really take them by the hand to help them see the whole training through to the end.

So from a broader perspective, it’s about a lifelong connection, not just job training?

Yes, because we believe that kids need role models, people who can act as guides, who set a good example with things that seem worth striving for. The Pallottines in Cameroon take on this role, be it as teachers or mentors at the school we’ve established.

To what extent do education and training help the people become independent?

Education is an essential key to life and it makes life easier than if you have to work things out for yourself. I’m not sure if it also leads directly to something like ‘independence’. It’s important to understand that in Cameroon there are other priorities. Things like earning a living, keeping a roof over one’s head. Existential things. The ambition of going beyond this (as we’ve seemed to internalise in our European way of thinking), of becom-ing successful and where possible breaking free from things is something that isn’t too widespread in Cameroon. 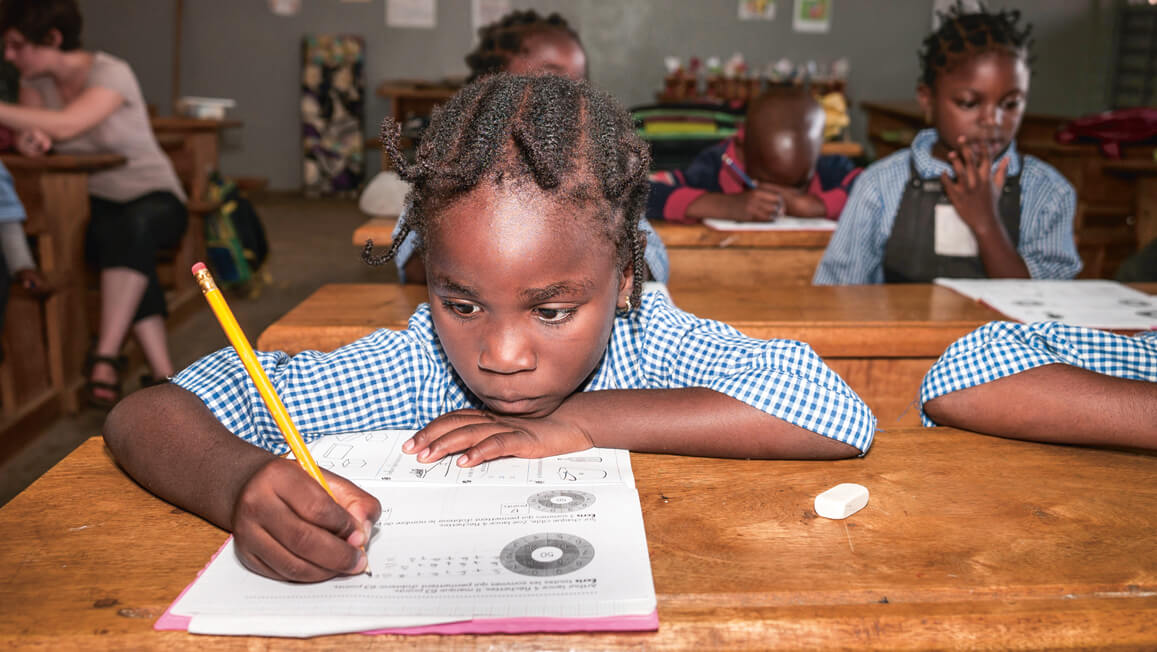 What do you feel is the most important thing you can give to people in the countries where you do charitable work?

It isn’t necessarily independence. What’s more important is that the people have a good standard of living. Not in a material sense, but in terms of their own satisfaction. Expressing that in more religious terms: God wants everyone to live their life and go their own way. We help with that and relate it more to the individual person than to society as a whole. But of course we also always hold on to the hope that we can make changes as a whole.

What would you say is something we should try to make ourselves free from?

We will always be products of the culture in which we grew up, the culture that shaped who we are today – whether it’s Germany or Cameroon. A German will always think German and a Cameroonian will always think like a Cameroonian. And that’s a good thing. But what I find important (and it’s something that’s very prominent in missionary work) is the ability to change how we think, to see ourselves from an outside perspective. And, to keep using the term, to find the patience to listen to others and not take action by going over their head – independent of the cultural backgrounds that shape us. After all, no-one is above another. Many people – particularly we Europeans – act that way. We have to learn to once again free ourselves from our cultural bias and engage with people on an equal footing.

You consider independence to be…

In many respects, I see independence as an illusion. Shaped by the media, advertising and such. And if independence – in the way it’s so often portrayed – comes at the cost of compromise or is a cost to the community, then I’m not sure it’s something we should strive for.