What does the house of the future look like? Although the appearance of such dwellings may vary, they typically embody several prominent themes – sustainability, adaptability and community – in both design and construction.

Unsurprisingly, the first theme takes precedence in many designs, as buildings in the European Union are responsible for 40% of its energy consumption and 36% of greenhouse gas emissions.

One of the more visually striking concepts comes from Tokyo-born and Sydney-based architect Koichi Takada, who created Sunflower House at the invitation of Bloomberg Green last year. Takada, along with two other sustainability-focused architects, was commissioned to select a location in Europe. The challenge was to design a single-family home suitable for the local climate, and which is carbon positive, meaning it can produce more energy than it uses.

“We draw inspiration from nature,” Takada says in an interview. Sunflower House is designed for the Umbria region of Italy, which is known for fields of sunflowers and has become subject to more frequent and extreme heatwaves, with temperatures at times nearing 50 degrees Celsius. “There’s something about the sunflower it’s very engaging,” Takada notes. “I think it’s a symbol of happiness. So, when we see thousands of those bright yellow flowers, there’s something that draws you.”

In annual visits to Umbria with his wife, who hails from the region, Takada observed how sunflowers change orientation to face the sun throughout the day. It was this adaptiveness that is reflected in Sunflower House’s design. “I thought, how fascinating what nature does, it’s so responsive to the environment,” he remarks. “And yet when we create traditional houses, it’s so static. There are not many movable parts, you can open a window, but that’s pretty much it.” 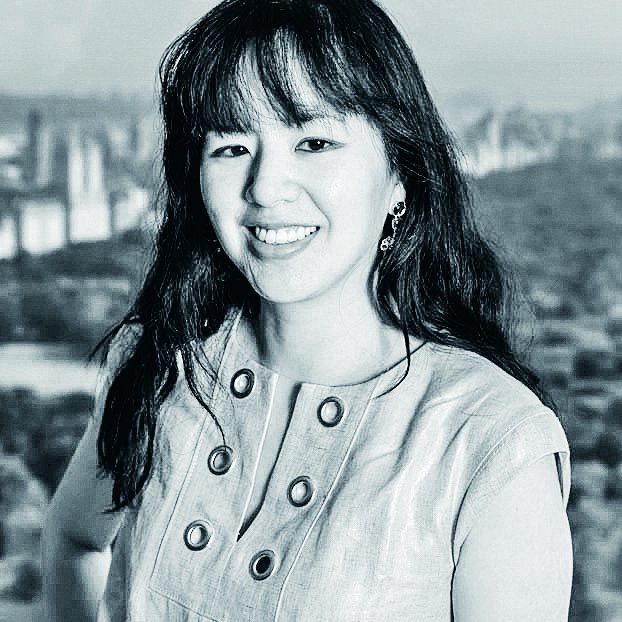 The initial impactsBuilding connections Going back to the past 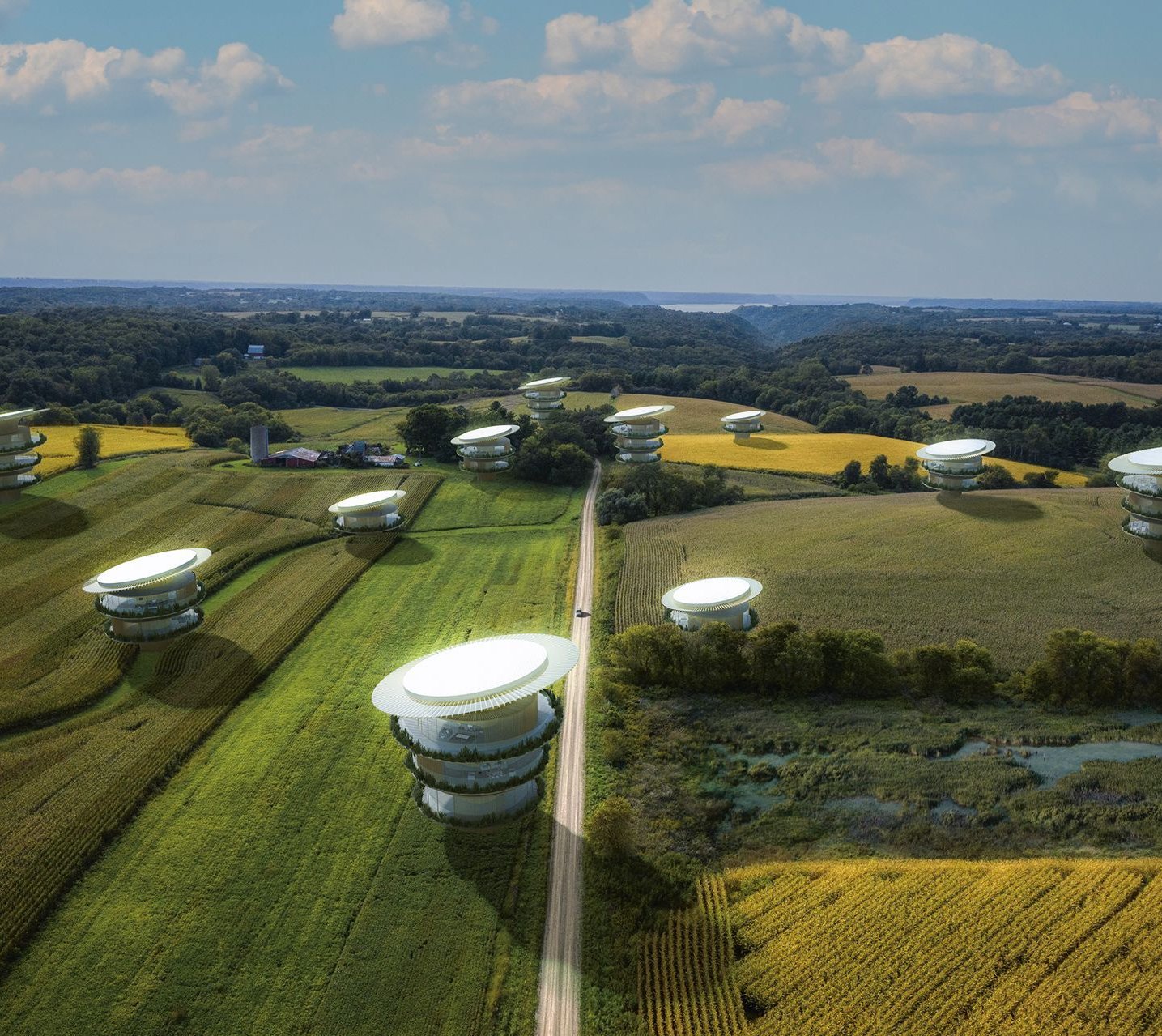 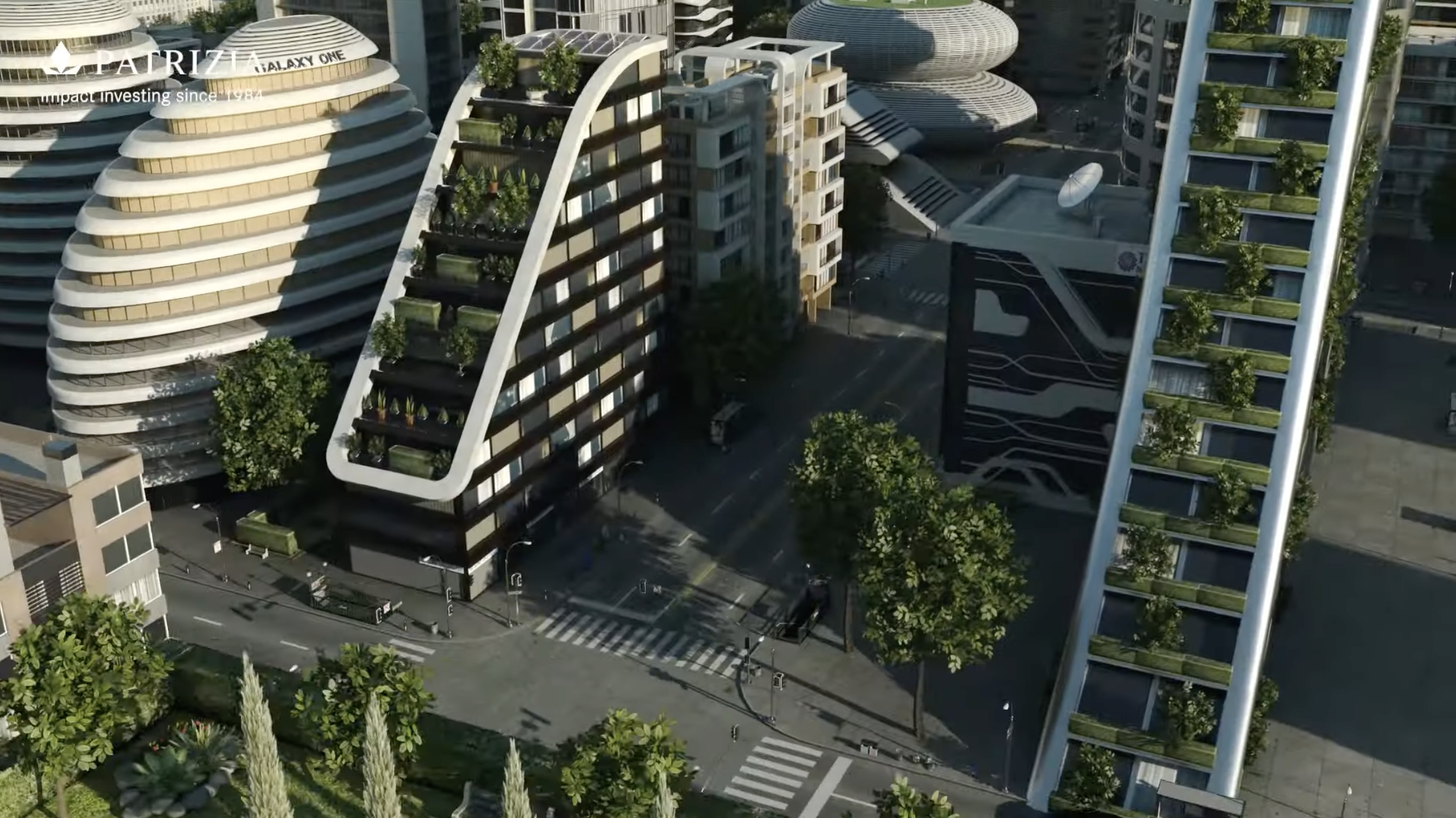 Drawing inspiration from the sunflower, Takada designed a circular roof with solar panels for ‘petals’ to create a more dynamic dwelling. The structure rotates around a central ‘stem’ to follow the sun, which allows the moving solar panels to produce up to 40% more energy than static panels. Unused solar energy can be fed into the grid or stored in battery ‘seeds.’ Rainwater is collected and used for irrigation and toilet flushing.

The ‘stem’ features a spiral staircase that connects each house level, which can be built as high as three storeys. “There is the void space that pushes the hot air up and away from the house,” he explains. “That is done in a natural pressure differential, so it naturally discharges the hot air away from the house.” This ‘stack effect’ ventilation results in lower operating and maintenance costs and lower energy usage for cooling.

Also aiding in the natural ventilation is the perimeter around the roof, which helps capture wind and cool the house during the summer through constant air movement. The perimeter also creates shade for the windows below, while a secondary rotating mechanism over the glass walls protects the building from solar radiation.

Sunflower House is a scalable design that can be used to create “a climate-positive neighbourhood inspired by sunflower fields,” according to a release. And although Sunflower House was designed for Italy’s Umbria region, Takada says the concept could be adapted to other parts of the world, such as Australia or Japan. “It would adapt and evolve just like nature does because, in different parts of the world, you would discover different types of nature,” he remarks.

“...when we create traditional houses, it’s so static. There are not many movable parts, you can open a window, but that’s pretty much it.” 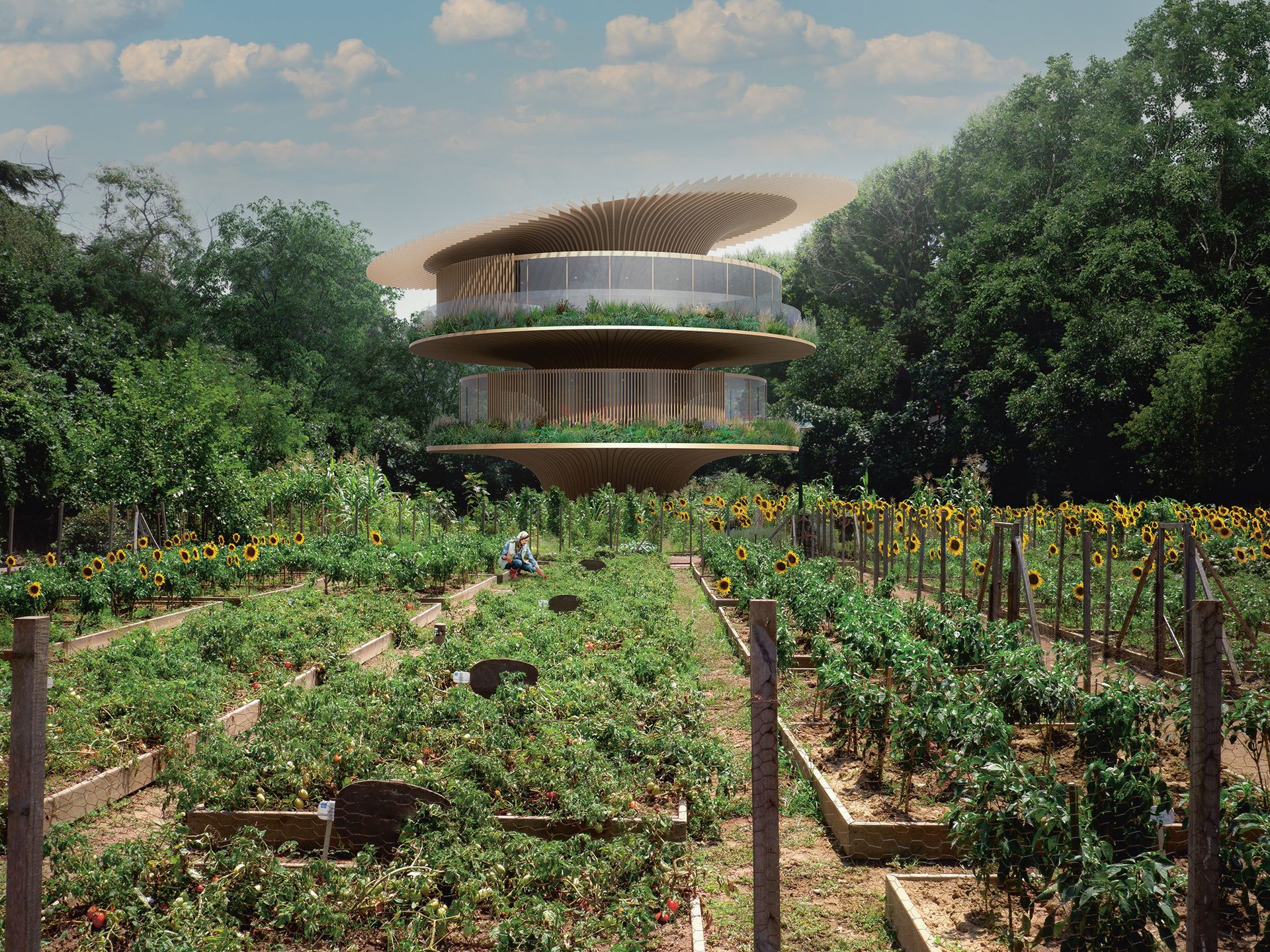 “There is an appetite to push for housing to change, but realistically, the big housebuilders are not going to do it unless legislation forces them.”

Sustainability, adaptability and community are also critical components of Connector Housing, a joint winner of the Home of 2030, a UK competition held last year to encourage the design of environmentally friendly homes. Connector Housing was conceived by Openstudio Architects in collaboration with engineering consultant Hoare Lea, landscape architect LDA Design and property and construction consultancy Gardiner & Theobald. It is a flexible and adaptable system for multi-generational housing and neighbourhoods.

According to Connector Housing’s executive design summary, the system comprises modular units and repetitive elements. This “can offer a variety of densities, heights of buildings, mixes of houses and apartments, site configurations, external appearances and internal layouts.”

“Everybody’s catching up to the fact that we need to build in a much more sustainable way,” says Jennifer Beningfield, the South Africa-born, London-based founding principal of Openstudio Architects. “Looking at true carbon-zero housing was an essential part of the proposal.”

The prefabricated element of Connector Housing – factory - made panels and a standardised staircase, external windows and doors – contributes to both its sustainability and quality. “You can actually get higher quality, higher environmental credentials and standards through going to offsite manufacturing,” she says. Further, she notes that factory-constructed housing has more controlled dimensions and tighter tolerances than typical hand-built housing.

“One of the performance issues in terms of sustainability is that buildings can’t be leaky,” she explains. “The traditional way we build means buildings are very leaky. They’re basically air permeable; things go in and out. When you build in factory conditions, you can make an extremely airtight and well-insulated shell. So that’s good for acoustics and for thermal performance.”

Indeed, Connector Housing would meet the Royal Institute of British Architects’ 2030 Climate Challenge. According to its executive design summary, this is embodied in a carbon target of 300 kilograms per square metre and consuming 55% less energy than the average new-build house.

“Everybody’s catching up to the fact that we need to build in a much more sustainable way.” 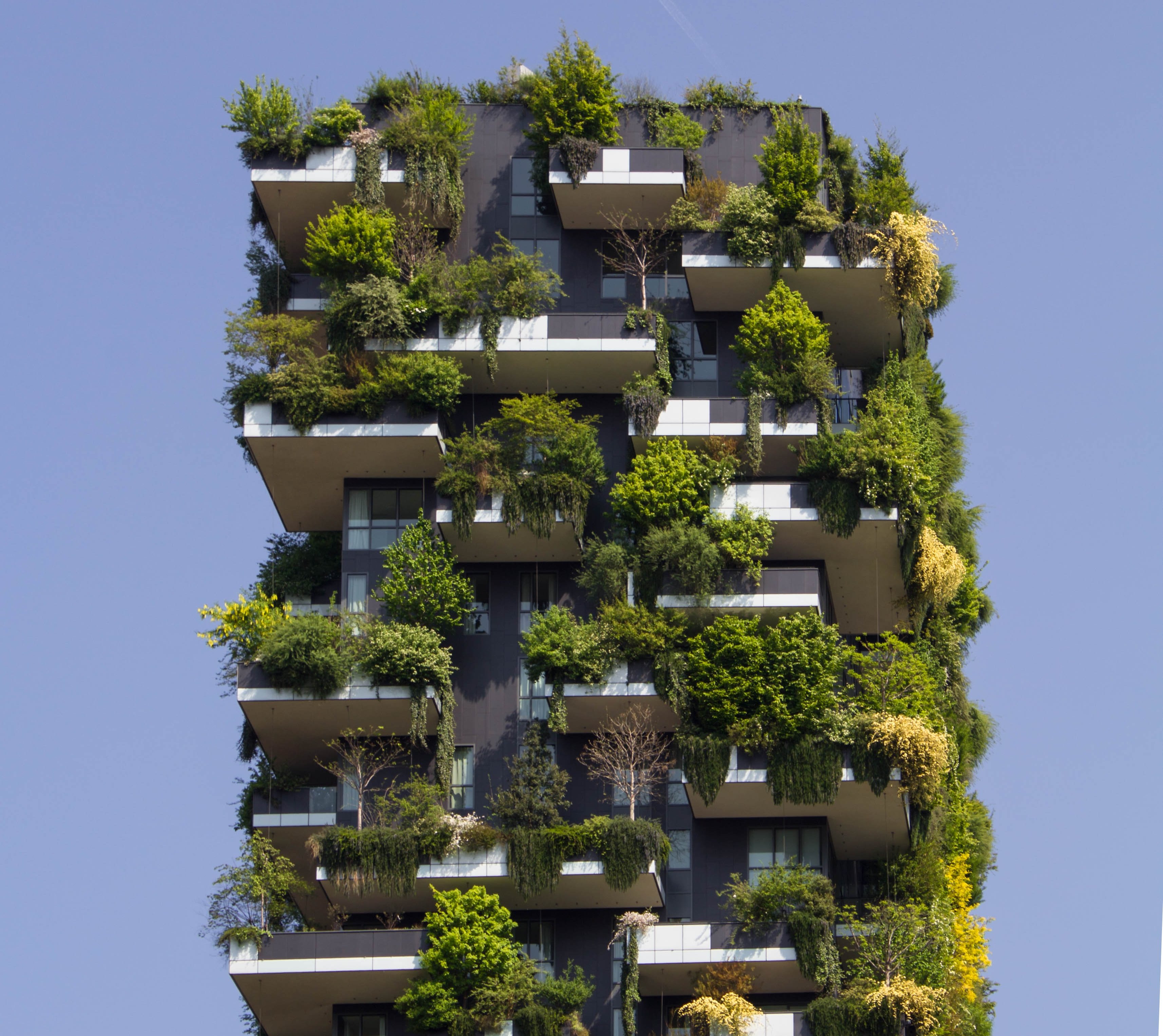 Connector Housing represents what Sonia Solicari, director of London’s Museum of the Home, considers the critical components of the house of the future: environmental sustainability, intergenerational living, more communal living and plenty of access to green space.

The project takes inspiration partly from London’s historical private garden squares. It is configured to form a series of communal green spaces and private front and rear gardens for each housing unit. The Connector Housing design “creates communities around those green spaces,” Beningfield explains. “It actually embeds an idea of landscape into housing. And what we’ve seen with a lot of mass housing, particularly in the UK, is that there isn’t really regard for community and landscape.”

Solicari believes that when thinking about the home of the future, one needs to look to the past: “The hall space in a middle-class home of the 1600s was highly flexible – for eating, conducting business, home-schooling children, even sleeping for some members of the household. Over the past decades, we have seen kitchen-diners become used for multiple activities – especially during lockdown – but perhaps these spaces could be even more flexible by design.”

She is intrigued by the idea of traditional communal bakehouses, where people use shared ovens rather than having their own at home. “Ultimately, we could look outside the home for more of our needs – and our villages, towns and cities could adapt to enable this,” she observes. “Smaller homes, bigger shared spaces?”

While both Sunflower House and Connector Housing can be achieved using today’s existing technologies, they are still only concepts. Beningfield believes a mass housing project like Connector Housing would only become reality if government support is behind it.

“We think there is an appetite to push for housing to change, but realistically, the big housebuilders are not going to do it unless legislation forces them to adopt the highest standards,” she asserts. “This is really our concern. How does it not just end up being work on paper?”

“Ultimately, we could look outside the home for more of our needs – and our villages, towns and cities could adapt to enable this” 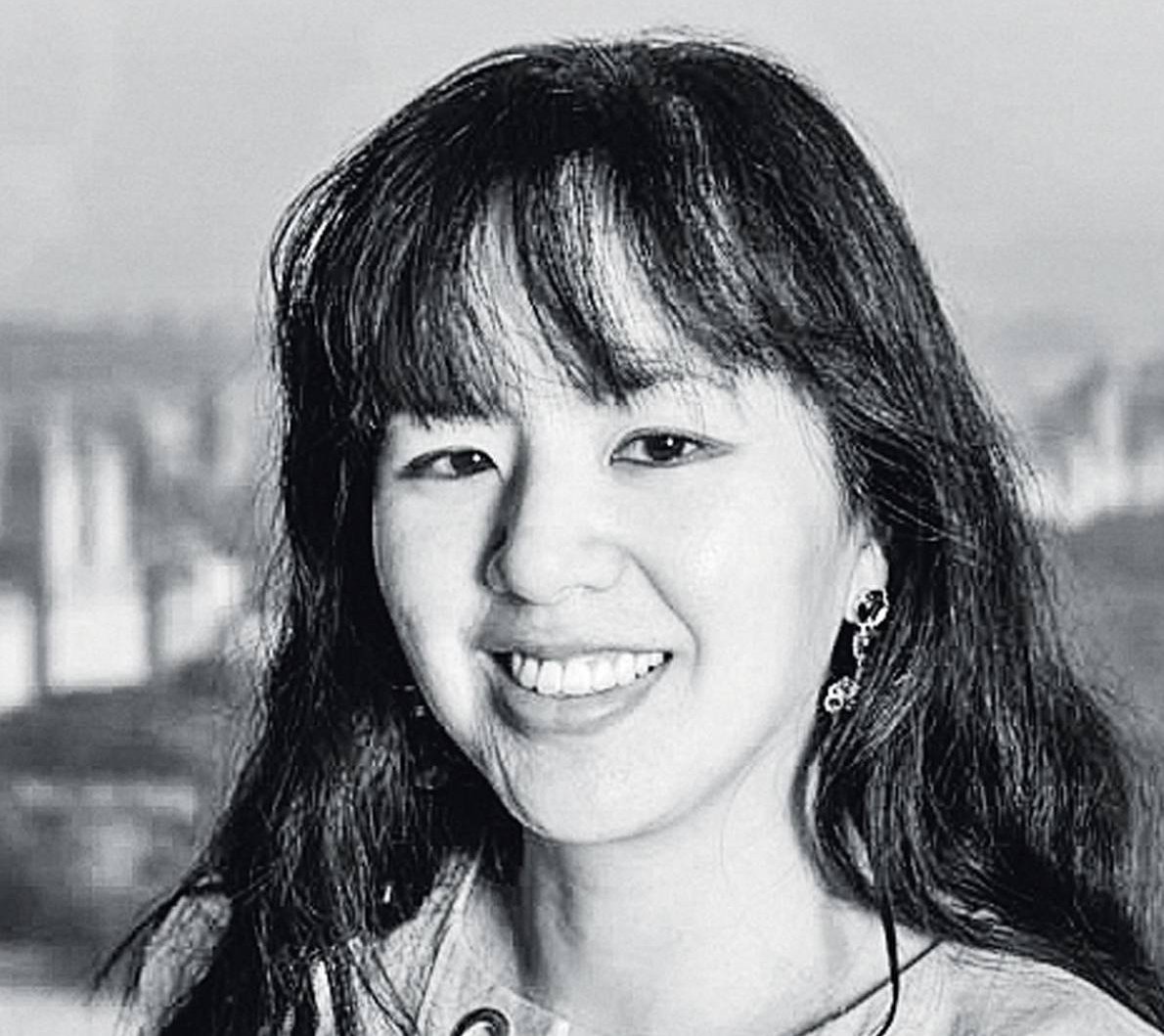 Evelyn Lee is admittedly stuck in the past when it comes to her own homes. Currently, she lives in a Victorian terraced house in London. Evelyn is an editor at PERE, which covers the private equity real estate industry globally.