Europe's residential properties are still the best show in town

Investments in European residential real estate offer attractive returns. But there are immense differences in potential and in national regulations.

Mario Draghi wants to keep eurozone capital markets flooded with money: The ECB head left no doubt about that at mid-November’s European Banking Congress in Frankfurt. The interest-rate picture in the eurozone could hardly be rosier for real estate investors; after all, lending rates are below the zone’s 1.4 per cent inflation rate (October 2017) – which the ECB clearly thinks is too low. And things are likely to remain this way for a while longer. So far, the ECB hasn’t mentioned a specific date for its first interest rate rise, but bank economists think it’s not likely to be earlier than 2019. Economic growth in the European Union in 2018 might be even stronger than this year, and result in lower unemployment. And in global terms, the euro countries offer a tremendous degree of stability, which should help them overcome their demographic challenges.

Europe’s population is ageing rapidly. At the same time, more and more people are moving to large cities, where the residential rental market is often dominated by one-person households. Both factors make residential properties in urban regions an attractive investment for the long term. This is drawing investors from all over the world: Capital is streaming into Europe, especially from Asia. But market developments and legal environments differ significantly in different European countries. Prices are stagnating in France and Switzerland, for example, but soaring in Germany, the Benelux and the Nordics. So for institutional investors – especially those from abroad – it’s important to have a detailed understanding of the decisive factors behind rising rents and prices. In that case, investments in European residential portfolios offer opportunities for gains that are well above average – provided the region of interest remains competitive and attractive over the long term.

The cities in the eurozone that are especially interesting from that standpoint are listed in the PATRIZIA European City Ranking. This covers not just demographic indicators, such as population projections and average age, as well as economic factors like unemployment and disposable household income in 119 major European cities; it also factors in criteria like innovation (numbers of students and patent applications, for example) and connectivity (passenger counts and average commute times). All of these criteria yield a ranking that’s linked to the market’s liquidity for investments.

The best prospects lie in metropolitan regions in fast-growing countries with relatively favourable demographic conditions and a short supply combined with a low level of new construction. Recent analyses show massive upward pressure on prices in Ireland, Germany, Norway, Sweden and the Netherlands. But successful investment strategies in residential real estate rely not just on countries, but most importantly on cities and their environs. Even today, 56 per cent of the world’s population lives in cities (by mid-century the figure will be 70 per cent). That’s also where most prosperity is generated.

“Our clients will benefit from the performance of the strong residential rental market in Dublin, which is characterised by an acute housing shortage.”

One of the top investment cities in Europe is Dublin. The Irish capital stands out for sharply rising residential property prices and rents, as well as little new construction so far. That’s why at the end of September 2017, PATRIZIA acquired two project developments in the greater Dublin area for about 130 million euros. “We’re very pleased that, with the support of our team in Dublin, we’ve been able to acquire these new, high-quality residential buildings for our clients. They feature long-term appeal in a good residential location. Our clients will benefit from the performance of the strong residential rental market in Dublin, which is characterised by an acute housing shortage,” explains James Muir, Managing Director of PATRIZIA UK & Ireland. A total of 319 rental apartments in the fast-growing Dún Laoghaires suburb southeast of Dublin are expected to be completed in 2018. 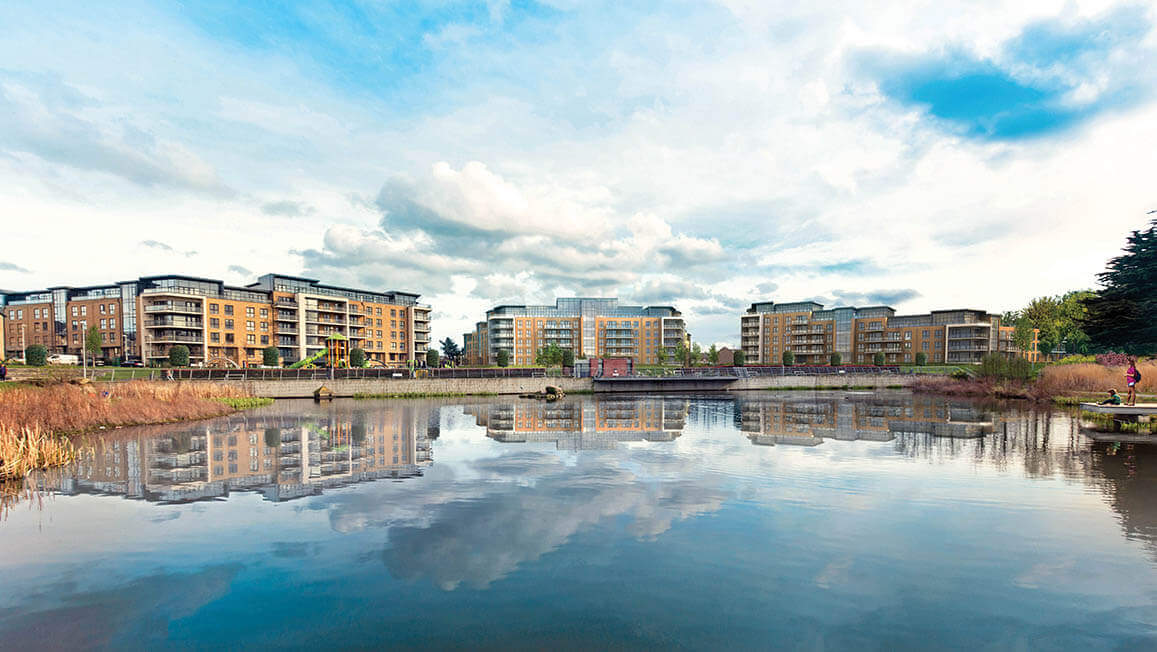 In Germany too, the housing supply lags far behind demand. In 2016, more than 202,000 housing units were built, but the heavy inflow into cities means at least 350,000 would have been required to mitigate the shortage. No one can say when new construction will come even close to meeting the housing demand. In fact, in the first nine months of 2017, building permits actually decreased seven per cent to 256,800 units. Demand remains especially high in university cities and the seven large metropolitan regions: Berlin, Düsseldorf, Frankfurt, Hamburg, Cologne, Munich and Stuttgart.

That does not mean, however, that housing prices and rents are rising uniformly. The sharpest rent increases for newly constructed housing were in Berlin and Munich. Prices, however, have been rising faster than rents – because extensive tenant protection rules mean rents in Germany respond more slowly to the housing shortage. As a result, modernisation work is the most common avenue for increasing rents; in these cases, the owner can pass on 11 per cent of allowable expenses to tenants. For investors, the absolute level of rent for new construction and renovated residential portfolios may be higher, but the chance to realise above-average returns is greater with properties in an existing portfolio with added-value potential. 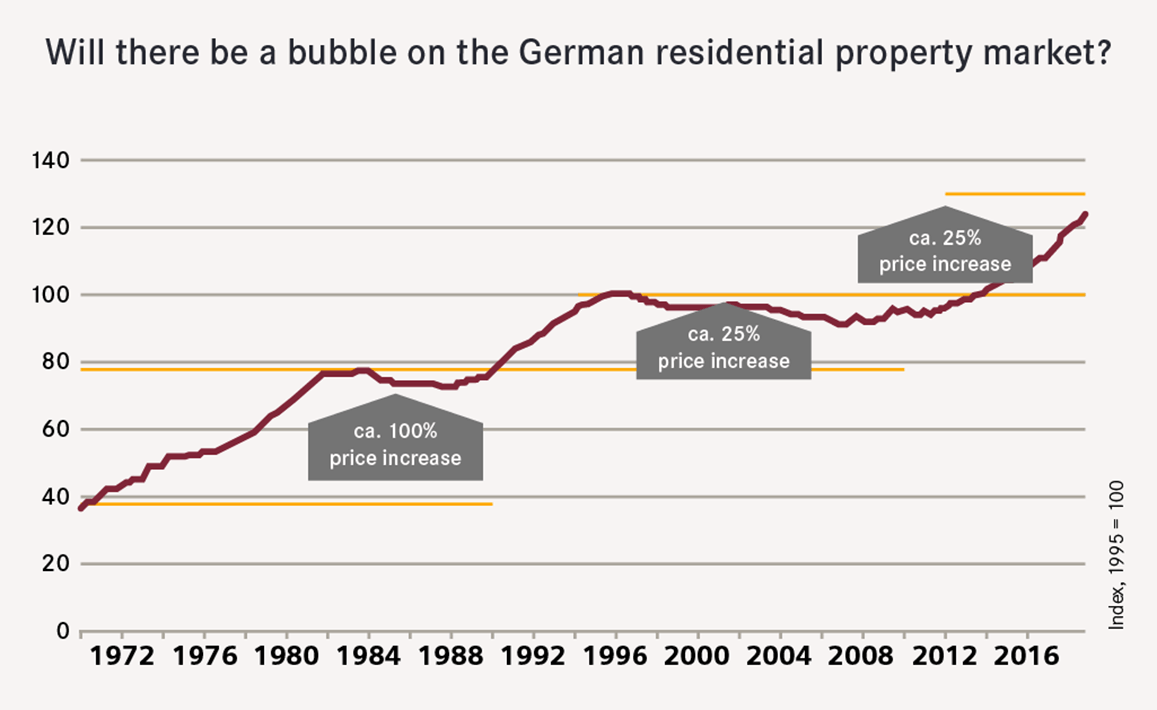 Historically, German housing prices plateau after a significant rise. The recent situation is no more pronounced than in the past. Thus, there is little risk of a bubble from this perspective.

An attractive spread of returns compared to the bond market

With that said, residential properties are not likely to quickly return to the performance levels seen before the financial crisis. Financing terms for real estate investments are extremely reasonable, and high housing prices and the enormous debt burden on private households significantly reduce the potential returns in some countries. Despite signs of improvement, the job market situation in the Mediterranean countries remains tough, because it hasn’t been possible to enforce structural reforms to the necessary extent. This is especially the case in Italy. Nevertheless, thanks to continuous rental income plus appreciation, an overall return of six to eight per cent annually is possible for multi-family housing over the coming five years. For the foreseeable future, that figure is unlikely to be achievable with fixed-income securities that offer a comparably low risk.

A value-add portfolio may generate even higher returns if the purchase prices and potential added-value measures yield a risk-opportunity profile that suits the investor. In this area in particular, PATRIZIA has exceptional experience and expertise. In mid-October 2017, the company was engaged by a major German pension fund to execute a 200-million-euro value-add project. The fund’s investments emphasise office, hotel and residential properties in top European cities and selected metropolitan areas. “With our teams of local experts in the various European real estate markets, we’re confident that within the next few months we’ll be able to identify and acquire initial investment properties where we can serve as an investment manager to leverage the appropriate value-added potential through active asset management,” says Stefan Glossner, Head of Fund Management Value Add at PATRIZIA.

Thanks to growing urbanisation and low interest rates, European residential properties offer the potential for attractive rent yields and above-average opportunities for appreciation – if investors acquire fairly priced properties in cities with optimal conditions. The PATRIZIA European City Ranking is a helpful guide.

Tailored solutions instead of off-the-rack products for…