Disruptive innovation from the word go

Disruption – a word that makes most people think of technology and digital innovation stomping its way through entire markets and sectors of industry. Yet in essence, the term is actually analogue. According to Amazon CEO and founder Jeff Bezos, anything that customers like more than whatever they knew before is disruptive. An important element of disruption is not necessarily having the very latest technology, but knowing what customers need or want. In 1984, the story of PATRIZIA began – with the same kind of disruption described by Jeff Bezos.

Private TV channels in Germany, the first Macintosh computers, Rollerblades – three inventions that turned up in 1984 and, in their own different ways, turned established structures on their head. It didn’t matter if it was a new and refreshing TV schedule, the first microcomputer with a graphical user interface, or the idea of lining up four wheels under a shoe rather than screwing them on side by side in two rows, it was always about something new, something apparently more popular with customers than what was already available. All of these inventions would have been considered an example of disruption 35 years ago, assuming the term had been used that way in those days.

It was the same year, 1984, that the story of PATRIZIA began – with the same kind of disruption described by Jeff Bezos. Wolfgang Egger used proceeds made from selling his own house – which he’d built with the help of friends on a plot of land given to him by his parents – to fund the purchase of a block of flats. His aim was to then sell the units to each tenant. His idea stemmed from a feeling for what the occupants of the flats really wanted: to own the flats themselves rather than keep paying rent for thirty years – and paying roughly twice as much despite not actually owning them.

His plan worked and within three years the start-up had grown into a flourishing company acquiring around 100 privatised flats per year. By this time, there was now an official scientific definition for disruption, which was coined by the Harvard professor Clayton Christensen:
“Disruption describes a process whereby a smaller company with fewer resources is able to successfully challenge established incumbent businesses.”

Keeping the customer satisfied - a credo from day one

That description fits PATRIZIA to a tee. It was a start-up that began with a family home, a house someone had built himself on a plot of land he’d been given, and it only expanded as a company by challenging established suppliers and remaining determined. Its maxim, which is still in place today: be more flexible, better and – first and foremost – more customer-centric than the others. PATRIZIA built its business step by step. Initially, it had a clear focus as a housing developer. It then moved into the market for offices and received its first mandate to manage equity and run funds for institutional investors.

Now, a good 35 years later, what was once a one-man band has grown into one of the biggest investment managers in European real estate. With more than €40 billion worth of assets under management, 24 offices worldwide and roughly 800 employees. Plus a broad offering of investment solutions spanning different markets and sectors of industry. Approximately 5000 private investors and more than 350 institutional investors from all corners of the globe place their trust in PATRIZIA. At first glance, the PATRIZIA of today has nothing in common with the start-up of 1984.

But actually, there is one thread of continuity: “We’ve always kept a close eye on what our customers want and have based our products on this,” says Egger. 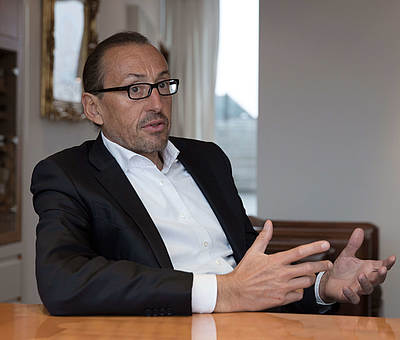 Driven by the idea that Germans would rather own their apartments than pay rent for 30 years – roughly double the value of the property, Wolfgang Egger started PATRIZIA in 1984.

For example, when the company expanded into other sectors like hotels and logistics, it set up corresponding competence centres and opened new offices in the key real estate markets of Europe. This was based on a clear understanding of institutional investors, who need and want to do more to diversify their property investments. The firm also understood that customers want a partner who knows their sector and has teams that are close to the markets. “During the first five years of PATRIZIA I only ever invested in properties. Since then, I’ve only invested in people,” says Wolfgang Egger, describing his logic after looking at the nature and requirements of his customers.

Next step: becoming a global partner for European investments

The next stage of transformation – developing into a global partner for European real estate investments, based on clear quality and technology leadership principles – revolves around the same customer logic. Institutional investors want to pool their investments and manage them through as few managers as possible.

"We’ve always kept a close eye on what our customers want and have based our products on this."

These managers are expected to provide efficient and well-balanced solutions, underpinned by objective advice. Ultimately, this is offered most effectively and credibly by a supplier with operations in as many regions and industry sectors as possible. That way, there’s no temptation of pushing a particular segment too much: your own.

Thinking beyond the horizon

So does this mean that the disruption at PATRIZIA is everything but digital? Of course not, especially in an industry like property investment management, which relies so heavily on information and data. Digital solutions have a fundamental impact because they change processes and structures. In this sector of industry, automating processes makes portfolio management more efficient, analysing data improves the accuracy of forecasting and makes it possible to assess risk, using electronic datarooms accelerates transactions, and intensifying automation reduces the risk of making mistakes.

Especially in a world that’s increasingly driven by digital technology and data, if a company really wants to give its customers what they want – something they like more than the previous solution – it has to be central to these developments. “Apple wouldn’t be one of the most valuable companies in the world if it had sat back in the years following the success of the Macintosh 128K in 1984. And we won’t become and remain the preferred partner for international investors interested in European real estate if we don’t keep thinking about the sorts of things our customers would prefer compared to our current offering,” says Egger.

This is why PATRIZIA looks beyond the borders of its own industry when it comes to innovation. It works with companies, universities, think tanks and incubators from Europe, the United States and Asia as a springboard to pinpointing any innovations with the potential to cause disruption early. This has involved looking closely at almost 600 companies or ideas and embarking on pilot projects with around 30 start-ups. In addition, PATRIZIA is carefully investing in innovative companies. A good example of this is its strategic investment in EVANA. The firm is a pioneer in the application of artificial intelligence in real estate portfolio administration.

"Apple wouldn’t be one of the most valuable companies in the world if it had sat back in the years following the success of the Macintosh 128K in 1984."

As well as its role as an investor, PATRIZIA is also actively helping to develop the company and its services. Collaborating closely with start-ups and other tech firms also provides valuable insights when it comes to managing real estate and investments. By talking to other companies and researchers work-ing in emerging industries, PATRIZIA is acquiring more of a feel for the different ways digital solutions can change companies and market structures. It is also seeing the impact this could have on the demand for space in individual markets.

This in turn improves decision-making when it comes to property investments, fuels ideas for new products and establishes a broader base for advising customers on their own real estate strategies. Growth, change and innovation – not for the sake of it, but in order to align the company’s own offering with what customers need, want and thus also prefer: this is disruption ‘made by PATRIZIA’.