Disruption is changing the way we use buildings. Whether it affects our homes, work, shopping or free time, digital technology is bringing about sweeping changes in lifestyles and shaping the way we see property. But will the impact that concepts like Airbnb, WeWork and Co-Living have on our world last, especially in the long term? There’s no simple way to answer that question...

There has always been something special about the Kursaal theatre in Lausanne – even today, long after thespians cleared the stage for different stars ... like smoked fish, boiled sausages and fresh bread. Homemade cuisine is popular with consumers again, as the Swiss Coop knows too well. The retail chain is getting into a culinary world of modern and traditional foods after lifting the curtain on its first Fooby, a new store for gourmets who have a curious palate.

The new shopping format presents the exclusive specialities of regional producers, making it more of a supplier of homemade products than a grocery outlet. From sourdough baguettes to farmers’ bratwurst, goat cheese rolls, granola bowls and poke bowls – this branded Fooby produce is only available here. That said, non-food items such as kitchen aids and table decorations are also part of the overall concept, which is all about hanging out, savouring and consuming in an extraordinary atmosphere – housed in a former theatre hall, complete with stage and gallery. It’s like nothing of its kind.

It’s a similar story with the historical post office in Milan. The building now houses a Starbucks Reserve outlet covering an area measuring 2300 sq m, complete with a huge roastery. Guests are seated along a marble counter on high barstools, where they can try out countless coffee varieties, eat homemade lasagne and do a spot of shopping.

Welcome to the brave new world of pilot projects. Ever since online shopping started nipping at the heels of the bricks-and-mortar trade, outlets have been trying out new concepts to fend off e-commerce and entice customers back into the inner cities. They’re tempting clientele with historical buildings and concepts that can only be found locally. According to retail experts, it’s a step in the right direction, but not enough. “Coming up with something surprising or special is more important than it used to be for the stationary trade, which is often at a disadvantage versus e-commerce,” says Martin Mörl, CEO of the development specialist Prelios Immobilien Management.

"Even a phenomenon like Airbnb isn’t disruptive, because there were already tons of letting platforms before, but these platforms have stirred up the housing and hotel markets ... no-one’s forced to stay in a hotel anymore if they can rent a whole flat for less."

“Stationary retail has to adhere to fixed opening hours and can only offer a limited range of products. So it has to score points in other ways – for example with experiential offerings and the right atmosphere. That’s something online traders can’t offer.”

This requires a continual string of new concepts that offer more than shopping or buildings designed to invite you to linger. The saviour is currently food concepts, like the model that retail operator ECE is introducing to its shopping malls. Take Frankfurt: it took a year to convert MyZeil into the new Foodtopia, which offers a combination of food and entertainment in the vibrant atmosphere of a market hall. The mall even has an outdoor terrace offering a panorama of the Frankfurt skyline, plus its own event area and an upmarket cinema.

Industry observers such as Thomas Beyerle are convinced that the idea of attracting custom back again by offering a mixture of food and leisure activities will only pay off for a certain time. He says this because the concepts raise the overall risk for retail property owners: consumers are increasingly prone to want something new.

“In the old days, you could sign a leasing agreement for more than a decade for prime locations; that’s no longer a given these days. The new restaurant and catering concepts come round every two years now,” says the Catella head of research. “In other areas, it’s safe to assume the innovation cycle will last five years.”

But even then, caution is required – as the insolvency of the clothing company Gerry Weber shows, or the profit warnings currently being issued by DAX-listed gastronomy specialist Vapiano. Mörl, the boss at Prelios, strongly believes that the first locations to profit from these so-called disruptive concepts will probably be medium-sized cities. 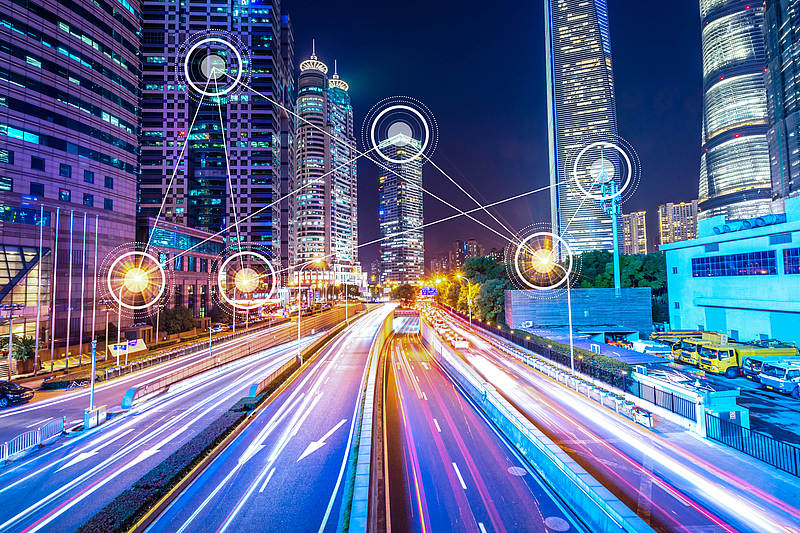 ©Sinology: Dital technologies are disrupting our homes, work and places of enetertainment. They are causing us rethink how we build cities.

“In many of these mid-sized cities there are multi-storey department stores, which are ideal for new uses. Their floor areas can be completely rethought and re-arranged,” says Mörl. “The five-storey Karstadt building in Recklinghausen town centre is about to become a market zone. As well as planning restaurants and retail outlets, which will be on the ground floor, there’ll also be a hotel, assisted living quarters and a daycare centre.”

In other areas, such properties are used for co-working spaces or sports facilities. This is slowly but surely re-injecting life into towns and smaller cities. As a result, Günther Vornholz, a professor of real estate management at EBZ Business School in Bochum, prefers to use the term ‘evolutionary’ rather than ‘disruptive’.

“It’s actually digital technology – which has changed all of our lives, housing, work and consumption – that’s disruptive. Even a phenomenon like Airbnb isn’t disruptive, because there were already tons of letting platforms before it,” says Vornholz. “But these platforms have now really stirred up the housing and hotel markets. Customers can put together their own overview of available accommodation – for any location in Germany. At any time, from anywhere. And no-one’s forced to stay in a hotel anymore if they can rent a whole flat for less.”

According to Vornholz, demographic change, the trend towards individualised housing and the increasingly adaptable world of work are also resulting in changes in the nature of demand. “Increasing flexibility at work, which is also due to disruption caused by digital transformation, is positively influencing the market for temporary housing concepts – especially in the cities, where demand is rising,” says Vornholz. “Lots of people go on a work placement for their studies or look for somewhere temporary to live while they’re working on a project. These gig workers shy away from expensive or time-consuming searches, or avoid furnishing their own home.”

There are a number of terms for this trend: shared living space, temporary accommodation, co-living, or common-space living. One thing all these concepts have in common is a shift in attitude among young people when it comes to housing. For example, this includes waiting longer to buy your own house or flat. As a result, Vornholz believes that property management companies will need to act quickly before the overall market starts to crumble: new market players are inching their way into a growing segment, especially given the fact that interim housing solutions now generate much more rental income than more permanent housing. “On the other hand, given the twenty million rental apartments in Germany, one can assume that the new housing concepts will only remain a small sub-sector,” explains Vornholz.

So how about co-working, desk-sharing and homeworking – the new style of disruption taking place in workspaces? One in three working people in Germany would like to be allowed to work from home, at least sometimes. In reality, however, the German Economic Institute found that only 12% of workers currently work from home. In Norway this figure is 38%. So homeworking is stagnating on German soil. But why? The co-working industry points to a dearth of workspaces, which is thwarting further expansion.

Other industry observers see the risk associated with flexible workspaces as the main reason for stagnation. With the traditional business model of renting offices under a medium- or long-term agreement, tenants and landlords enjoy a certain degree of security. Co-working solutions risk generating lower incomes, mainly due to flexible arrangements regarding length of tenancy, number of offices required and pricing. This is especially challenging in times of economic uncertainty. So owners of existing assets and investors remain sceptical when it comes to the performance of properties partly let to co-working specialists.

According to the Flexible Workspace Report issued by Art-Invest Real Estate Management, if the share of co-working space exceeds 35%, it negatively affects prices. The report also says that general recessions free up more floor space and fuel expansion. Nonetheless, classic work spaces will be with us for some time to come, says property expert Vorholz with conviction: “Despite rapid growth in alternative work spaces, the classic office will not become any less important as a primary location; it remains the standard.”