Home to tech giants, business and finance multinationals and a host of retail and cultural attractions, Dublin’s Docklands is a thriving international hub of commerce and leisure.

But it wasn’t always this way.

Swaying gently with the ebb and flow of the River Liffey, just a stone’s throw from the rows of polished glass buildings that line the riverbank, is a replica of the sailing ship Jeanie Johnston – a reminder of quite different times for this part of the Irish capital. In the mid-19th century, the original vessel made the treacherous voyage from Dublin to North America 16 times. On each occasion, it would carry hundreds of starving families for almost two months across the Atlantic in search of a life away from famine-stricken Ireland.

As they headed away from Dublin out to sea, they would have seen how the world’s largest docks were falling into tragic decline – a victim of the country’s struggles and the arrival of the railway to replace the canals. Bustling shipyards, flour mills and bottle factories had given way to mountains of coal, tar pits and foundries belonging to Dublin Gas Company. By the mid-20th century, improvements in the speed and efficiency of container shipping took local labour away from the shipyards and much of the Docklands lay derelict.

Then, in the 1980s, the government stepped in. It introduced incentives to encourage private investment and overhaul the area, including lower corporation tax rates. Major regeneration projects followed, as well as mass decontamination work. Eventually, the Docklands began to thrive again.

In 2012, Google made it the site for its European headquarters and was soon followed by the likes of Airbnb, Facebook, LinkedIn and Twitter, earning it the nickname ‘Silicon Docks’. The Docklands is also home to around half of the world’s top 50 financial institutions and half of the top 20 insurance companies. There are approximately 40,000 people working in Dublin's Docklands, with a further 40,000 expected to join them within two years.

Add to this the construction of new shops, hotels, bars, restaurants, parks and cultural spaces, and it’s easy to see why the Docklands has become one of Dublin’s most desirable neighbourhoods, where rent prices are more than €1,000 higher than the national average. Fittingly, it’s also the focus of the city council’s smart city projects. Residents can enjoy everything from integrated transport systems and live data on parking availability to car-sharing and free bike schemes. The planned Trinity College Grand Canal Innovation District, a €1-billion innovation campus in Grand Canal Dock, will further enhance the area.

In July 2019, PATRIZIA announced its €53-million acquisition of one the Dockland’s most sought-after new private rented sector (PRS) properties. Scheduled for completion in mid-2020, the 11-storey Benson Building comprises 72 residential units and commercial space on the ground and first floors. 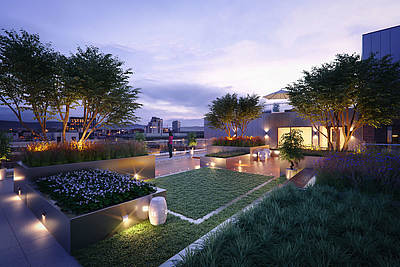 As Antonio Marin-Bataller, Director, Residential Transactions at PATRIZIA, explains, the Benson Building will deliver much needed residential accommodation to the Docklands area. “Dublin is establishing itself as a European centre of finance and technology, which makes this ideal for professionals seeking quality housing and servicing the mounting numbers of local and international renters in the city.”

PATRIZIA’s latest acquisition in Dublin comes after its €93-million purchase in July of the 166-unit build-to-rent development in Harold’s Cross. The company, which has an office in Dublin and has been active in Ireland since 2015, has now made five investments in Dublin’s PRS market totalling approximately 650 units at different stages of development. “Our aim is to push towards 1,000 units and become one of the city’s largest private rented sector owners,” Marin-Bataller says, adding that PATRIZIA is also looking to explore other options across the country.

For several years, Ireland, and Dublin in particular, has been riding a wave of positive economic growth and low unemployment. Ireland’s gross domestic product grew 6.7% in 2018, making it the European Union’s fastest-growing economy for the fifth consecutive year. Uncertainty over Brexit, combined with Ireland’s low corporation tax and position as the eurozone’s only English-speaking country continue to enhance its appeal. 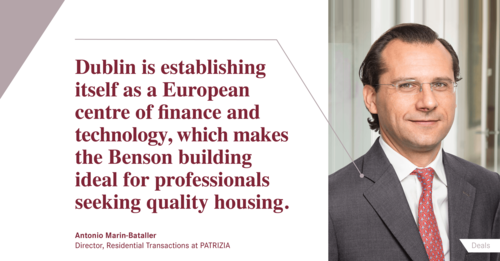 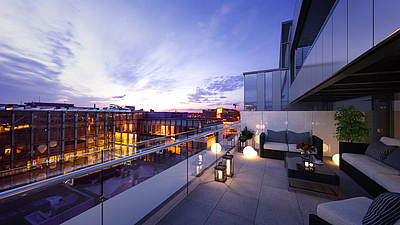 As a result, prices have risen dramatically. In Dublin, residential property prices have grown by 91.9% since their 2012 low. Rental growth has averaged 8% per year over the last five years and is expected to remain positive. With GDP growth expected to flatten out, Marin-Bataller believes the current cycle is reaching a more mature phase, but says the Irish market is still home to “attractive opportunities across the risk curve in the residential sector.