The Sprinkenhof office complex in Hamburg’s UNESCO World Heritage Kontorhaus district is one of the great examples of 'Brick Expressionism.'

Tourist to-do lists don’t often include office blocks, but some cities are different – New York and Shanghai spring to mind. To this select few add Hamburg, Europe’s third largest port where office workers mingle with visitors drawn to the Kontorhaus (‘office building’) district in the city – a UNESCO World Heritage site. The Sprinkenhof and other Kontorhaus were built between the wars for Hamburg’s merchant classes. UNESCO describes these buildings as epitomising “the rapid growth in international trade in the late 19th and early 20th centuries”.

In 1892, a cholera epidemic devastated the docklands population, convincing the city to demolish the warren of overcrowded, unhygienic alleyways and start again. First came the ‘Speicherstadt’ or 'city of warehouses', the largest warehouse district in the world built between 1885 and 1927. Then came the Kontorhaus district. Both are part of the World Heritage site designated in 2015.

Designed by architects Fritz Höger and the Jewish brothers Hans and Askar Gerson in 1927, the Sprinkenhof took 16 years to build in three phases. Construction was delayed by economic crises and political upheaval, the death of Hans Gerson in 1931, his brother’s persecution and eventual exile in 1938. The building was finally inaugurated in May 1943. Two months later, Allied firebombs gutted parts of it, causing damage that took years to repair.

"It is an architectural masterpiece, with lovely details."

Once the largest office complex in Germany, a monument to the ‘Brick Expressionism’ school of architecture, the Sprinkenhof is now worth nearly €200 million and provides more than 36,000 square meters of leasable office space within a colossal semi-circular edifice divided into three sections – a square central block flanked by curved east and west wings – each with its own open courtyard. Since 2016, the building has been the jewel in the crown of PATRIZIA’s €1 billion Hamburg office portfolio.

“It is an architectural masterpiece, with lovely details like the intricate, late-art deco interior staircase and one of the few remaining ‘paternoster’ elevators,” says Sebastian Lohmer, long time managing director at PATRIZIA Hamburg. “Groups of tourists visit our building to check the UNESCO box.”

Paternosters are old style lifts that have open compartments that move slowly in a loop without stopping. The name derives from the similar looping motion of counting prayer beads - paternoster means ‘our father’ in Latin. “We see tourists hesitating to get in because they wonder if it is going to turn them upside down at the top,” Lohmer laughs. “We should charge entrance fees like the Chrysler building!.” 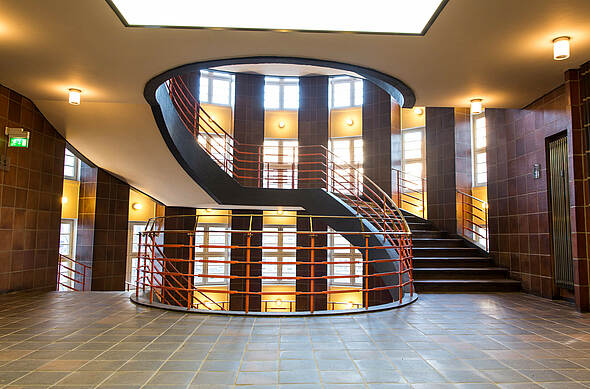 Once the largest office building in Europe, the Sprinkenhof is filled with lovely details.

Architecturally, the building is renowned for its brick façades using bands of clinker bricks to criss-cross the walls with diamond patterns. More than 3,100 identical, closely-spaced windows march across the walls in ranks, accentuating the geometric impression of a hive.

Clinker bricks have rough, irregular surfaces and varied, rich colours. Architects used them to express the dynamism and tensions of the era. They were popular with the movement known as Brick Expressionism that emerged in Northern Germany in the early 20th century, partly in response to utilitarian Bauhaus architecture, which rejected ornamentation. Fritz Höger was a leading exponent and his masterpiece, the spectacular art deco-inspired Chilehaus, looms opposite Sebastian Lohmer’s office like a massive ocean liner steaming towards the Sprinkenhof.

Höger and the Gersons further enlivened the Sprinkenhof’s façades with protruding terracotta motifs that proclaim the building’s Hamburg heritage, referencing businesses that had offices there. These include Hamburg’s coat of arms, sailing ships, seagulls, cogwheels and a sculpture of a fist holding a golden hammer.

Lohmer's office is in the Sprinkenhof. PATRIZIA SE has been a tenant in the building since 2011. Other tenants include the City of Hamburg, the airline Lufthansa and food company Kellogg’s. Five years later, the PATRIZIA-managed fund ‘PATRIZIA GewerbeInvest Deutschland II’ bought the Sprinkenhof from Allianz Real Estate Germany.

It is not only the tourists who appreciate the Sprinkenhof’s charms, says Lohmer, pointing to a current occupancy rate of 93.5%. “Since we have owned the building, we have leased every vacancy very quickly. That is partly down to a strong market and partly the attractiveness of the building. People just love to work here.”

The main attractions are modern office facilities enclosed in a building of real historical character, a revived neighbourhood and excellent public transport connections. The UNESCO listing has helped, but there has been a more general revival of  this city area in the last ten years. “It was neglected for a long time but has become very popular and that has dragged shops and restaurants along so it has become a hip area,” says Lohmer. 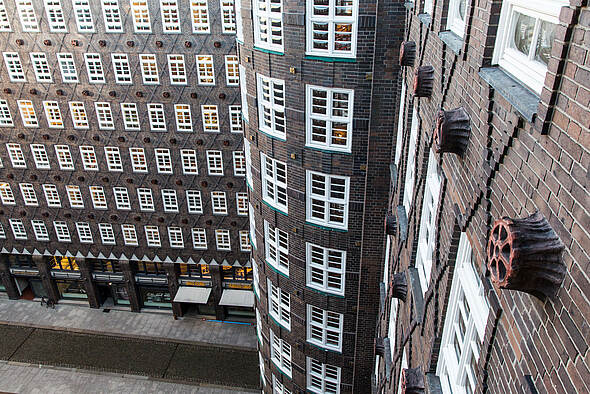 Sprinkenhof is located in a riverside district that has undergone a revival helped by the UNESCO listing.

The building was extensively renovated and modernised between 1999 and 2002, when the windows were replaced with double glazing and wooden frames in the original style, a new ventilation system, new electricity systems and central heating were installed, as well as raised floors for cabling. The result was an up-to-date building that has recently been awarded gold certification by WiredScore for its digital infrastructure and high-speed internet connectivity.

For these reasons, and having just added another floor to its office space, PATRIZIA has no plans to move, nor does the fund plan to sell the building.

Work remains to be done, says Lohmer, for example assessing and reducing the building’s carbon footprint. There is increasing pressure from investors to measure CO2 emissions and this is an area PATRIZIA is working on across its portfolio. Clinker bricks are typically not as good insulators as standard bricks and so this may have an impact on the Sprinkenhof’s energy efficiency. 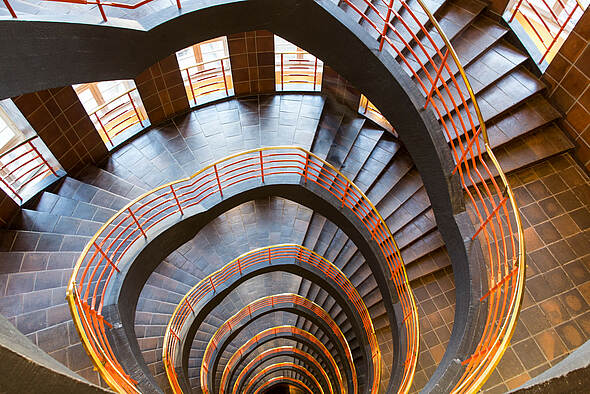 Features include the late-art deco interior staircase and one of the few remaining ‘paternoster’ elevators.

Managing a traditional building in World Heritage site and conservation area presents some challenges, says Lohmer, although nothing that PATRIZIA has not dealt with before.

“We have to ask the Hamburg historical register if we want to change anything in the interior common areas or the exterior,” he explains. To illustrate, it took nearly two years for the City to agree that PATRIZIA could furnish the building with a flagpole.

“A Kontorhaus typically had two flags, the Hamburg flag and the company flag,” Lohmer explains. They didn’t usually fly the German flag, a sign perhaps that Hamburg merchants still cherished their heritage as an independent city state.

Because the building had no flagpole in 2016, the conservation authorities resisted and Lohmer had to delve into photographic archives to prove there had been a flagpole in the past. A building application followed before the PATRIZIA flag was finally unfurled above the Sprinkenhof in 2018, much to the delight of Lohmer and his boss, founder and CEO of PATRIZIA Wolfgang Eggers.