PATRIZIA invested in 22@ in Barcelona with five assets. Two are refurbishments of industrial space, and the goal is to create sustainable buildings reflecting the changing environment into one of mixed use.

I should say ‘were’ involved, as we have exited two assets,” clarifies Paul Hampton, Head of International Fund Management at PATRIZIA. “We were delighted with both investments, which sold at very strong multiples.”

PATRIZIA has invested in Spain since the mid-1990s. Hampton says there is an experienced, talented team on the ground who flagged the potential of 22@. The investment teams followed up and researched Poblenou over two years.

“Thorough research endorsed the view that 22@ was everything our investors would want to be part of,” explains Hampton. “What caught our eye was not just the economics and demographics – that people want to live there and that the universities are expanding – it was also that 22@ is increasingly regarded as a ‘smart city.’ We wanted to be part of that as Barcelona moves to the next level.”

Hampton says that the thoughtful approach used at 22@ is standard at PATRIZIA.

One building is Entegra, a collaboration with Urban Input designed to be a near-zero energy building (nZEB). This has been achieved using an ancient technique combined with a powerful building systems manager.

In Spain, the highest cost of an office building during its life is energy for cooling and ventilation. Entegra uses traditional cross-ventilation to achieve the same results. Detectors on the outside measure temperature, humidity, wind, pollution and noise. When conditions are right, the system prioritises fresh air by opening the windows.

Entegra, a collaboration with Urban Input, is designed to be a near-zero energy building using an ancient cross-ventilation technique combined with a powerful building systems manager. Batlle i Roig

This approach of combining old and new led to a façade made of carbonised wood, created by scorching the wood, which extends its life. Image: Batlle i Roig

The local climate means the system can cool at night and, for much of the year, the day as well. A cooling/ventilation system is available for when conditions are unfavourable. Combining old techniques with new technology equips Entegra for the post-pandemic world where companies require offices with windows that can be opened for employees’ peace of mind. 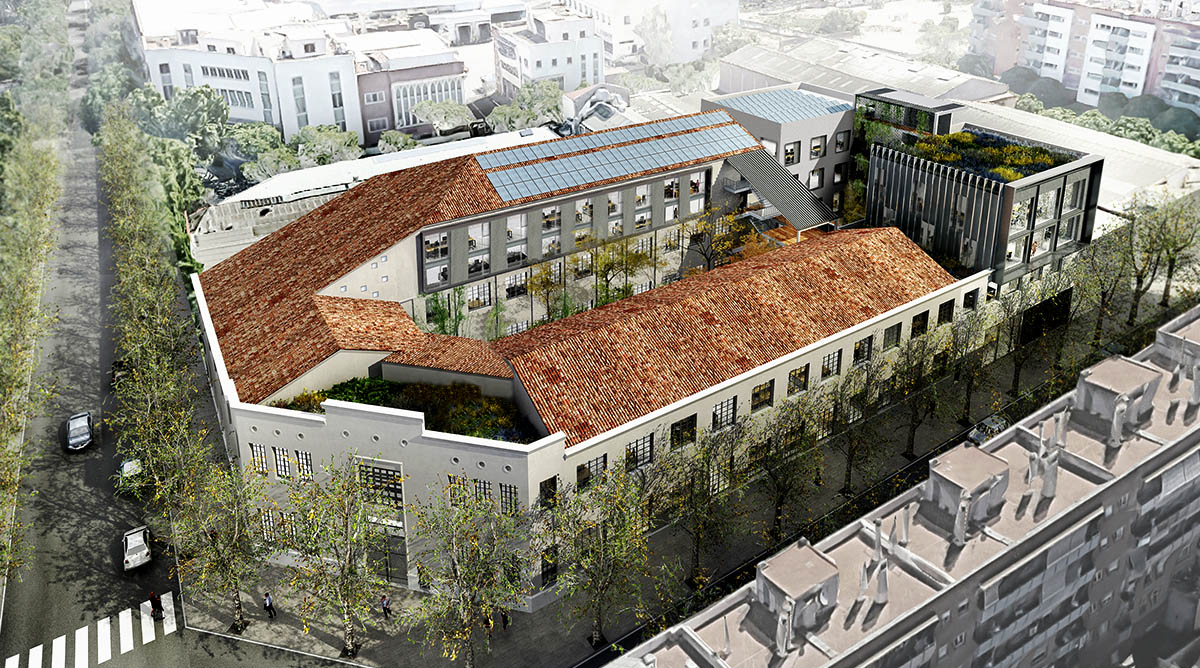 This approach of combining old and new also led to an extraordinary façade. Whereas many modern buildings often have dramatic but grim façades, Entegra has one of carbonised wood.

The architect firm of Batlle i Roig developed it using the ancient Japanese technique of Shou Sugi Ban, where wood is scorched. Burning protects the wood from the elements, which extends its life. Should the façade need to be changed, it can be recycled for furniture or bioenergy, or left to decompose naturally. Another advantage is that the façade is considered carbon positive.

“Poblenou is an example of what we do best,” says Hampton. “Identify potential and, when the time is right, realise it and move on to the next development.”

22@ - a test ground for the digital world

Building blocks of a smart city